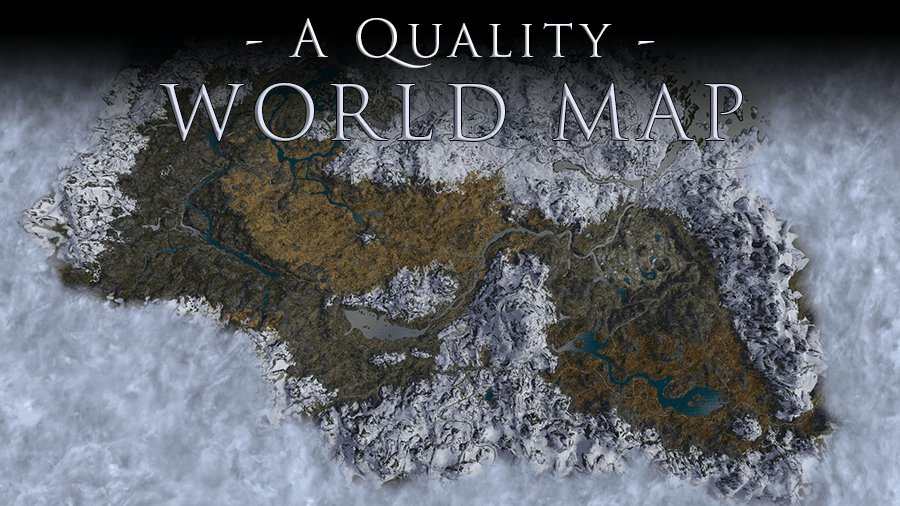 Would you like to improve the quality of the world map in Skyrim? Come to A Quality World Map v9 Solstheim Map with Roads which including accurate hand-drawn roads! You can choose between all roads and just the main roads, or even the Solstheim map from the Dragonborn DLC is also add to this mob. Installer support for NMM, MO, and Wrye Bash, version 9.0

❗️ Note from the author: This author has not provided any additional notes regarding A Quality World Map v9 file permissions

PLEASE READ EVERYTHING BELOW FOR IMPORTANT INFORMATION ON WHAT THIS MOD INCLUDES, WHAT YOU’LL GET, AND WHAT TO EXPECT.

This mod adds a new set of highly detailed world map textures, including roads! This mod also includes a comprehensive Solsteim map. It works best when combined with the “Clear Map Skies” add-on.

The Vivid style is new in 9.0 and includes a new look for the world map as well as larger, more detailed textures. It includes the majority of roads (artistically chosen by IcePenguin) as well as a detailed Solstheim map. You have the option of selecting All Stone Roads (which makes some roads appear cobblestone on the map) or All Flat Roads (a more dirt-like style).

The Classic style is used in A Quality World Map 8.4 from Classic Skyrim (April 2015), which includes a detailed Solstheim map. You have the option of selecting All Roads or Main Roads.

For the first time, a flat, high-quality paper map of Skyrim’s world is available. It was painstakingly recreated using worldspace reference screenshots, the map texture, and custom art assets, rather than being a simple copy of the existing paper map texture. The end result is something that any adventurer would be proud to have in their pack.

There is no paper map of Solstheim included. In 3D, it will look similar to how it does in the Vivid style.

When viewing the paper map, the tilt/zoom controls are disabled. The camera can still be panned.

This add-on (only for VIVID and CLASSIC) removes all clouds from the center of the map, providing a clear view of the world below. The clouds at the map’s edges are still present.

This file can also be used by itself (instead of A Quality World Map) to remove map clouds from the vanilla game.

This add-on improves on the 8.4 “Clear” add-on, which could also remove clouds from the game world incorrectly.

Notes for Map markers and the paper map