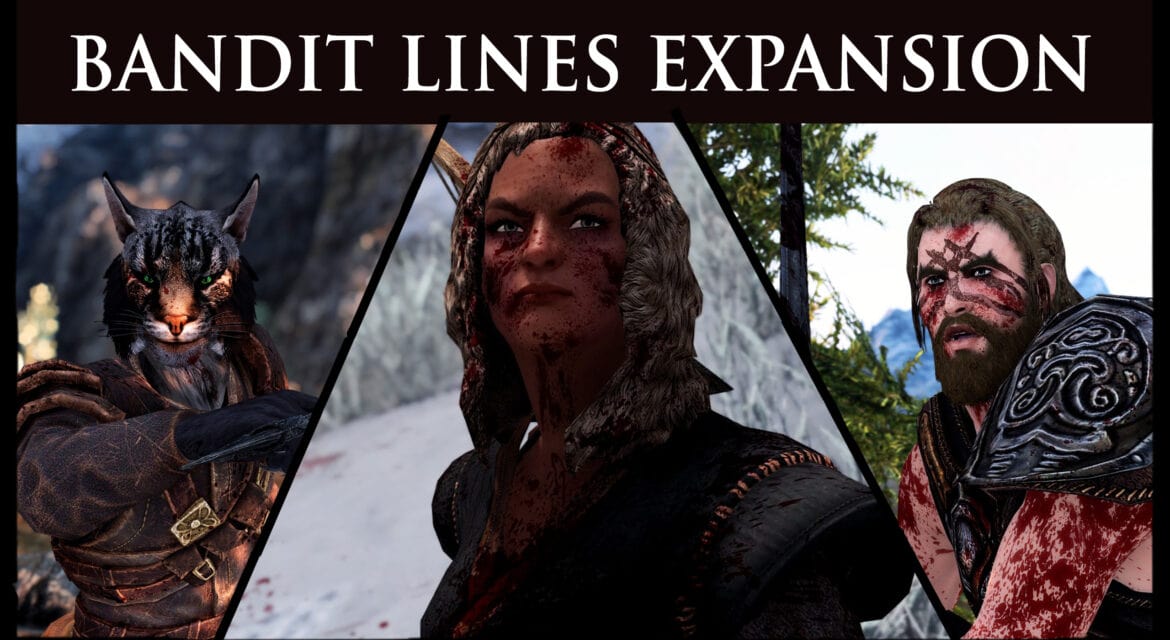 The same bandit line over and over again that makes you feel tired? Let’s come to Bandit Lines Expansion mod to explore 500 new spliced lines to bandits! Each bandit prototype has its own personality which makes each of your encounters with them more interesting, unique, personal, and unexpected.

This Bandit Lines Expansion mod does not have any known dependencies other than the base game.

The creator has not put any permissions for this mod

Come to Bandit Lines Expansion mod you can see the bandits have more personality. Because they are added almost 500 new lines that are not shared between voice types, so each encounter with a bandit will bring a feel unique. Easier to recognize when listening to their idle dialogues.

The bandits show a more humane side to them or not. Their topic can talk about betrayal, gold, missing their families, hating Skyrim, loving life as a bandit, being ashamed of being a bandit, jealousy, resentment, greed, addiction, infidelity, home, lustful encounters, what drove them to become a bandit, hunger, tragedies, having mouths to feed… and more!

A lot of hidden conditions and surprise lines in the Bandit Lines Expansion mod. Bandits will have reacts differently when aiming a bow or sneaking near their camps

1) Variations of vanilla lines: it’s very similar to the lines we’re used to, but with a twist or different tone. ﻿Example: You picked a bad time to get lost, friend fool!

2) Brand new lines: often with conditions not used in vanilla.
﻿Example: “Ah, there’s no finer weapon than an orc blade. Fight well, and I’ll make sure your corpse is not dishonored”. (Female Orc Bandit commenting on the player’s orc weapon in the middle of combat)

3) Idle lines: add more complexity/character to bandits. Including FEMALE bandit idle lines (female bandits in vanilla do NOT have any idle lines). These lines are sometimes funny, sometimes sad, be warned.
Example: “It’s true. I’ve killed more than I care to admit. But I needed the gold. What else can a dunmer do out here?”

If you are looking cool mod for Skyrim Special Edition, check out these ones in nowmods.com and have fun time with them: