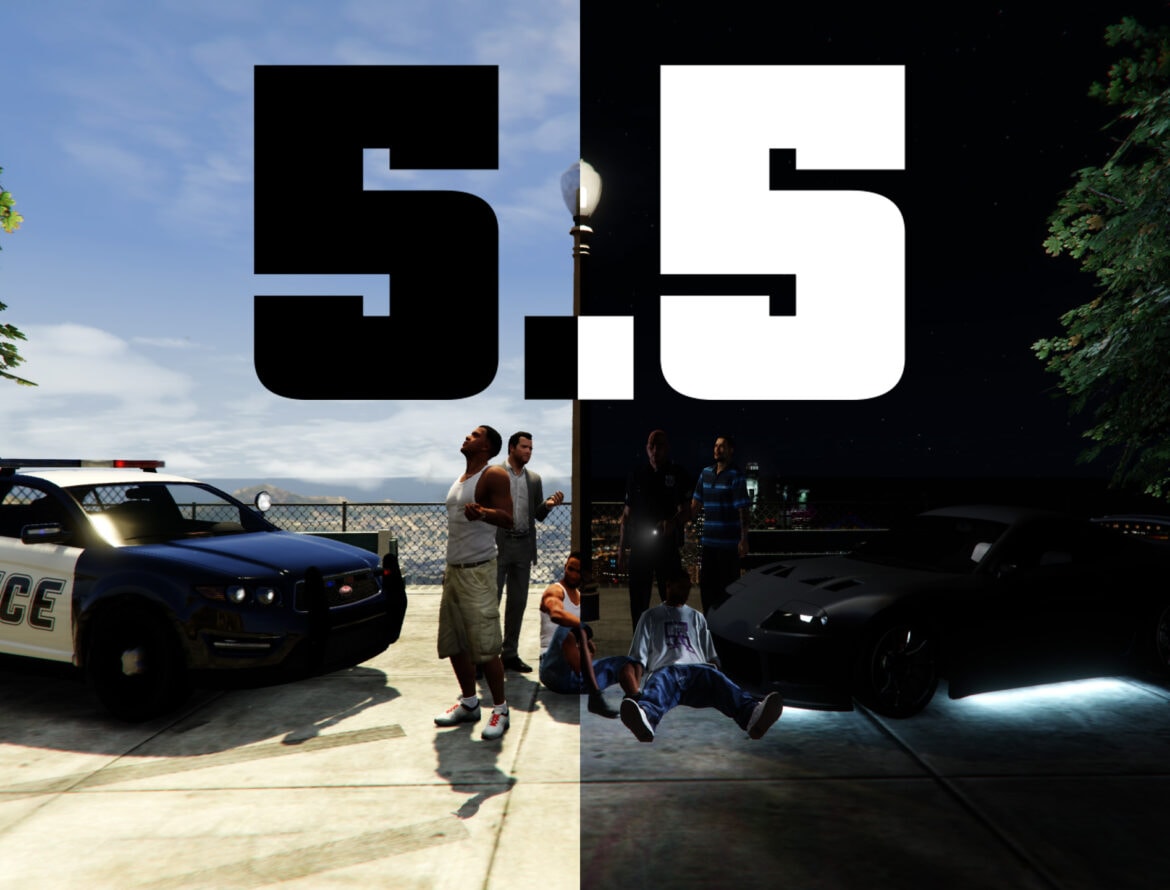 Grand Theft Auto 5.5 (GTA 5.5) mod is a successor to the Natural Realism mod set. One of the mods that make the game become more realistic, more fun and special reduces buggy! This standalone overhaul brings GTA 5 halfway to being the GTA 6 that is the creator’s purpose.

This author has not credited anyone else in this file

Grand Theft Auto 5.5 does not affect the timescale or speed up the time

DLC vehicles added to traffic with paint variety, it’s carefully selected. In some cases, the manufacturer paints for the real-life version of that car. Also more variations of utility vehicles, limousines, and motorcycles.

Gangs take over parts of the city at night, mainly south central LS (Davis, strawberry, etc)
Gang members are likely to be found driving cool cars, with cool music and passengers
Fights and gunfights break out often, with realistic popular street choice weapons such as machetes, glock18, and uzi and variation depending on the type of gang – black gangs prefer machine pistols, Chinese prefer higher quality, hillbillys use a backwoods shotgun and such
Fighting localized mostly to hood areas at night
Complex relationship system – some gangs allied, some join fights but won’t start them, etc
Some may commit hate crimes against gays
General crime increased and complexity raised

Higher density in Grand Theft Auto 5.5 mod
Complex, hand-crafted pedestrian systems also, with busy rush hours and a strong variation between day and night
AI behavior is more random
People converse faster and more often
All people have a chance to carry a weapon, usually a taser or basic melee like a broken bottle, but that grandma could be packing heat!
Melee damage reduced to accommodate better melee fighting
Weapon impacts are reduced so that people die realistically

Use OpenIV to open the archives as shown in this folder and place the files in the corresponding locations within your GTA V directory.
Files located within update/update.rpf inside this zip should be placed inside Grand Theft Auto V/update/update.rpf
Recommended to use “mods folder” function provided by OpenIV.asi
You can/should also create a copy of the update.rpf before adding these files, so you can easily replace the backup if you don’t like it

Here’re more Grand Theft Auto 5 mods for you to try: