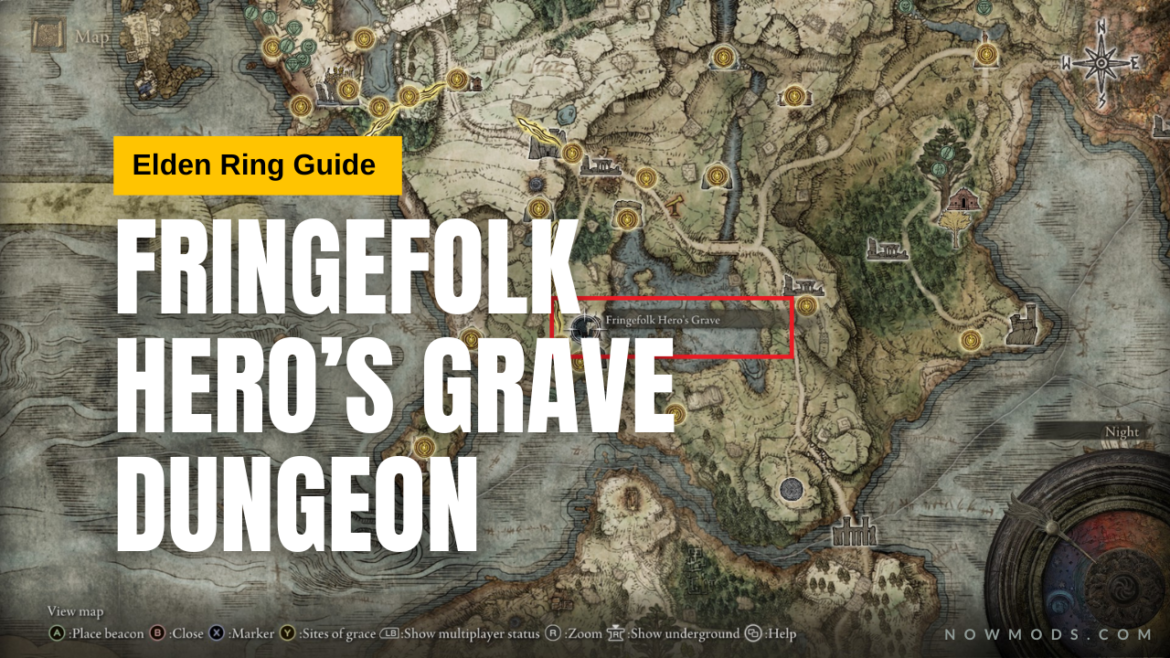 This guide will show you how to complete Fringefolk Hero's Grave Dungeon and defeat the Ulcerated Tree Spirit in Elden Ring.

Even if you are able to enter this Elden Ring Dungeon as soon as you arrive at the first Site of Grace at the Stranded Graveyard. The final fight (and annoying stone cart) still presents a problem. The Stake to Marika inside the boss door can bring you back to life. But use caution or you risk getting caught in a boring loop of dying over and again.

The benefits will outweigh your masochistic tendencies if you’re ready to put in the effort. The Elden Ring Fringefolk Hero’s Grave Dungeon Key completion instructions are provided in this guide.

How to circumnavigate the chariot?

Jump off the ledge and into the poison pool below once you’ve obtained the Stonesword Key. Run quickly and to the left past the poison pool to prevent having poisoned. You can now go to the hardest stage.

Around the bend of Fringefolk Hero’s Grave Dungeon, you’ll see a massive stone chariot moving up and down a slope. Run between the nooks on your left after waiting for the chariot to leave. At the second nook, a spectral crossbowman appears. You can easily stunlock and shrug it off, though. One could see a swordsman in the third. A crossbowman and a second swordsman attack you at the fourth from the left. This swordsman should be easy to take out before you go on to your crossbow-wielding companion. If any of these spirits leave your nook, you can also kill them by watching the chariot’s movements.

It will alter its trajectory and follow you if you try to flee behind a corner. Get as far away as you can before it happens. Once at the end, do not cross the confined causeway. Wait for your chariot to pass in its place. Look for the imp positioned against the wall by descending to the ledge below. You can see a path leading to an Elden Ring Talisman directly ahead.

An alcove leading to a different slope can be found. Two phantom warriors must be put to the sword. But they might move away from you and then come back. Avoid the three ghost combatants that appear in the middle as you continue to rush down the causeway. You can turn left to discover the Stake Marika and the boss doors if the chariot has not yet caught up to you.

Fringefolk Hero’s Grave Dungeon: How do you defeat the Ulcerated Tree Spirit?

If you enter this Fringefolk Hero’s Grave Dungeon right immediately, the Ulcerated Spirit might not be too challenging. Because of the low damage you will be taking. An enormous wooden snake with undula ting, meaty legs serves as the leader of the Elden Ring. Be careful of its tail attacks. Avoid their long cords to prevent being dragged away by their repulsive legs.

When it roars and shoots into the air, run away. You will probably be killed by this grab attack in one blow. After this, it frequently breathes fire, opening the major damage-inflicting window. When at all feasible, stay on its left side and perform some deft swipes from there.

Beware of downward paw stomps if you are damaging its right side. You can knock it out and launch an attack against its luminous eye if you deal enough damage. When it reaches the second stage at about two explosive thirds HP, it will glow white. Then it will unleash an AoE that fires pillars of fire from the ground. If you see this, you need to get away from it right away by running rapidly.

What do you receive if you defeat your boss?

Banished Summons Obleg, the knight with two swords. When you receive the Call of God bell and the golden Elden Ring, you can use it. They help you get more pots, which is a prize for beating wood snake monsters.

How to obtain the Talisman of Erdtree’s Favor

Remember the path to the second imp near the thin causeway. This optional dungeon section leads to an influential Elden Ring Talisman that is well worth the diversion.

After you’ve dispatched your second imp, proceed down the stairs until you reach a flame turret. When the flames have died down, run down the stairs and turn left into an alcove. Keep an eye out for the third imp, who is still waiting. The second flame turret must be avoided if possible. Then, press the button to proceed to the next room with a bridge.

Grafted Scions fall from both sides of the roof halfway across. While you can compete with them, you can also simply walk right past them to get the talisman. This is Erdtree’s favor, which increases your maximum HP, stamina, and equipment load. I declared that the journey had been worthwhile.

That is our strategy for defeating Fringefolk Hero’s Grave Dungeon. We hope that our guide can assist readers in easily winning the game and having a fun gaming experience. Visit our MODDING GUIDES site for more tutorials!

Valheim Dragon Egg: How To Find and What...