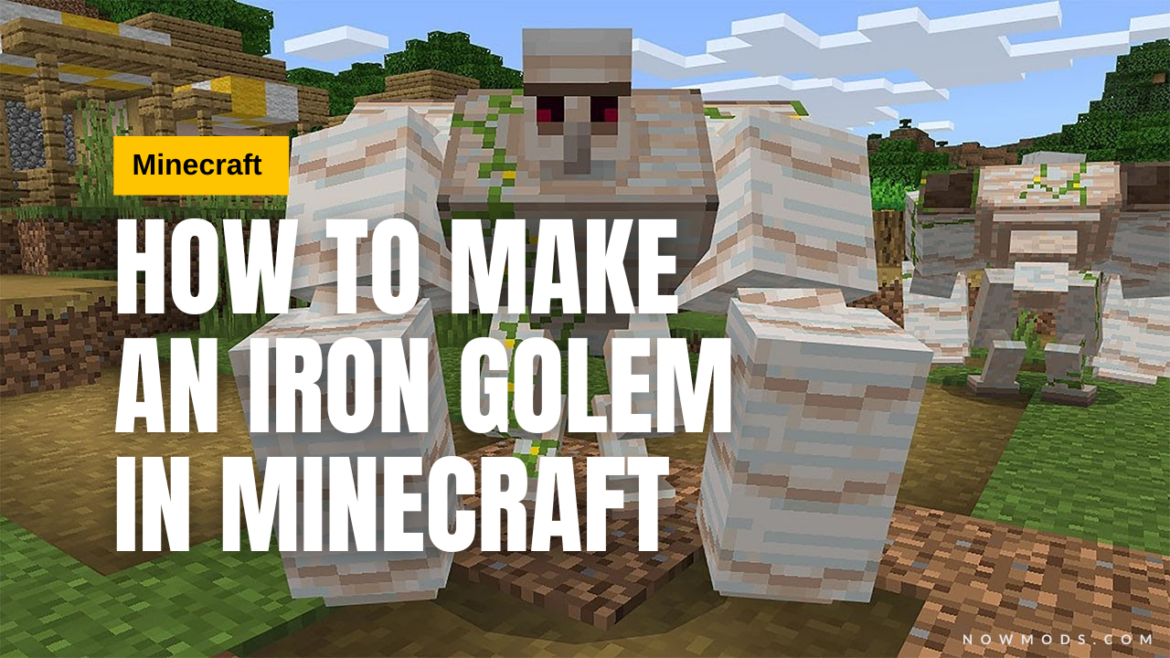 How To Make An Iron Golem in Minecraft 2022

One of the most vital resources in Minecraft is iron. It serves as the foundation for several essential mid-game items, including armor, buckets, anvils, compasses, minecarts, and many more. Iron can also be used in more complex Redstone circuits by players. Currently, an Iron Golem Farm is the most effective method for farming iron.

Iron golems are powerful utility monsters that may protect villages and players from assaults by acting as a shield. In a settlement, these golems can spontaneously spawn. An individual iron golem can, however, be built by users. Nowmods will demonstrate how to create an Iron Golem Farm in version 1.18 of Minecraft in this tutorial (including Bedrock and Java).

What function do Iron Golems serve in Minecraft?

The supports upon which a Minecraft settlement is built are Iron Golems. They protect the residents from the threatening hordes that hide in the darkness. Villages won’t endure much more than a night without Iron Golems. It is advised that players always have an Iron Golem nearby for additional defense.

You will require the following supplies to create Iron Golems:

On a crafting table, you must combine nine ingots to produce one iron block. Therefore, a total of 36 ingots are needed to create four iron blocks. When one iron ore is burnt in the furnace with a fuel source, one iron ingot is created. Underground iron ores can only be properly mined with a stone pickaxe or better.

The following formula may be used to create an iron block after you have nine ingots:

Launch the crafting menu. Put 1 carved pumpkin in the center box of the first row. Put one torch in the center box of the second row. Similar to how mushrooms show up on the grass, pumpkins are blocks. And are mostly found in the plains and extreme hills biomes. But may also, if seldom, be seen in locations covered in sand and snow. Put 1 coal or charcoal and 1 stick in the 3×3 crafting grid to create a torch.

It is important to note that the ingredients must be arranged exactly as shown in the following image for the recipe to work:

You now possess the necessary supplies, including a carved pumpkin and four iron blocks. We may now proceed with creating the actual Iron Golem. Make absolutely sure your pumpkin is carved or otherwise transformed into a Jack-o-Lantern by checking twice. Any pumpkin will turn into an iron golem when put atop a T-shaped foundation of iron blocks.

To master the Iron Golem, follow a few straightforward steps.

The illustrated instructions for creating an Iron Golem in Minecraft are provided below:
Unlike most items in the game, you can create an Iron Golem without using a crafting table. Instead, you must arrange the blocks in a certain pattern on the ground.

Put two Iron building blocks on top of one another. The Iron Golem’s body will be made up of these blocks.

Two of the four blocks are still in your possession. On either side of the topmost block, place one iron block.

As a final touch, give it a head made of a pumpkin or jack-o-lantern.

The Iron Golem should spawn if the Pumpkin is placed last and there are no connection blocks. You are free to repeat this process as much as you like and to build a complete personal army of Iron Golems.

What are the benefits of using Iron Golem in Minecraft ?

Iron Golems are neutral mobs, hence they will retaliate unlike cows and other animals. They only do this, though, after an assault. They therefore tend to uphold peace as long as you don’t assault them first.

Any hostile or neutral mob within a set range is instantly vulnerable to iron golem attack. They have exceptionally high health, thus they can take a lot of punishment. Additionally, they are not damaged by falling or drowning, which increases their resistance to subject damage. They are also the only renewable supply in iron farms, which makes them particularly helpful under these conditions.

Your own Iron Golem may now be created. If you have built your own town and want to keep your possessions safe from other gangs. Make certain to produce as many as you can. Your community is more protected the more creation you have. We’ve already clarified and led the way for you. Everything else is up to you. To safeguard the village and yourself, let’s build an Iron Golem!

Everything You Need To Know About Minecraft Observer

A Complete Guide of Minecraft Villager Trades – All Jobs Explained