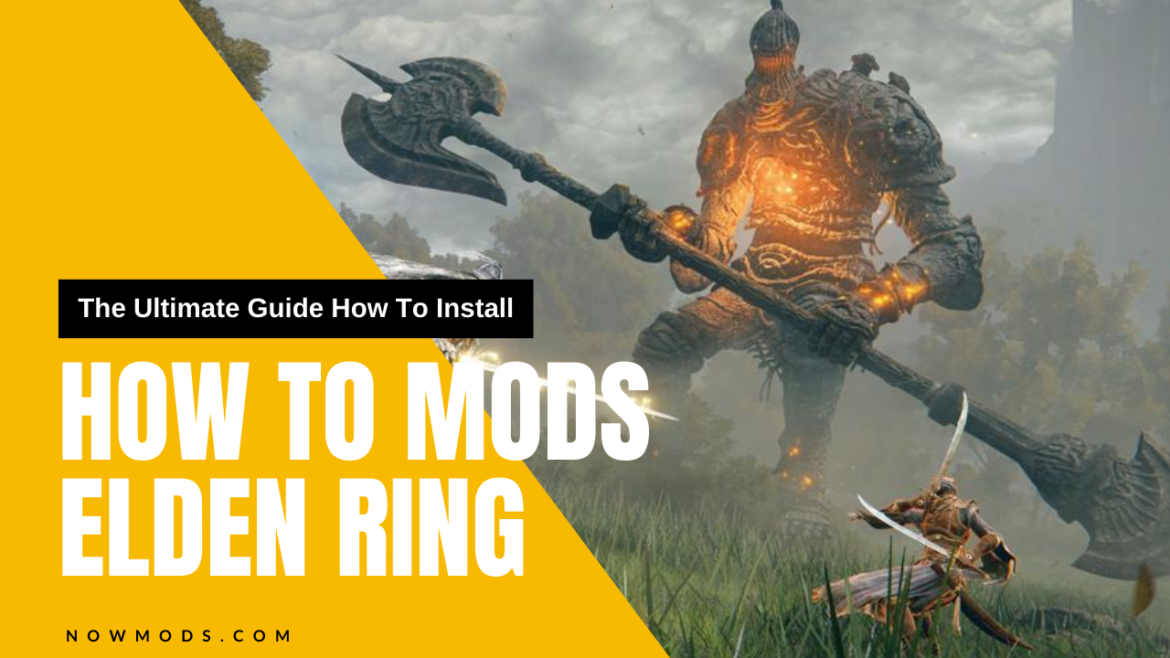 The Ultimate Guide How To Install Elden Ring Mods From Nowmods.com

As with previous FromSoftware titles, the modding community came out in force to take on Elden Ring. Not even two months after the hit title’s release, the player base now has access to a plethora of modifications that can be used to enhance their Elden Ring experience. Players can play how they want and add what they want, from simply removing the intro logos on startup to skipping to the title screen and completely overhauling sword and stance animations.

While adding mods to the game is appealing, players may have reservations or difficulty knowing how to mod Elden Ring and where to look or where to begin. However, modding Elden Ring is not as difficult as it appears, and we will go over how to get started.

The first step is to find a mod that you want. Nowmods is one of gaming mod websites, with over 1,000,000 mods, you can easily find Elden Ring mods and install it freely.

The Elden Mod Loader must be installed next in order to mod the game. On game startup, this mod loader will automatically load all.dll-based mods or files. This is available on the website. Click the manual download link on the website, and it will be saved to your downloads folder.

Determine the location of the Elden Ring local files from here. To do this, launch Steam and right-click the gear icon to browse local files (shown below).

This will display the location of Elden Ring on the computer. Games are typically found on the disk drive at Steam/steamapps/common/ELDEN RING. Then, using a file explorer program such as 7-zip or winrar, extract the contents of the mod loader download directly into the Elden Ring “Game” folder.

Many mods include a “readme” text file that can provide additional instructions if there are any specifics that users must do to install a specific mod. Some readme files for mods may also include shortcuts for activating or deactivating the mod within the game.

There are numerous great and unique mods that players can use to customize their Elden Ring experience. Following the steps above is a good foundation for understanding where to download mods for other games as well as a solid start to modding the game. Best wishes, fellow Tarnished.

You must first force Elden Ring into offline mode before proceeding. If the game detects you using mods while connected to multiplayer servers (even if you’re not actively playing with others), it will assume you’re cheating and disable your account’s access to multiplayer content. Avoid doing so because it cannot be undone.

You must disable the game’s EasyAntiCheat service to force it to boot offline. When the anti-cheat software is disabled, the game will prevent you from connecting to multiplayer servers. It will not, however, ban you for disabling the software.

Disabling the anti-cheat software is fortunately simple. Proceed to the location where Elden Ring was installed. If you’re using Steam, look for Steam\steamapps\common\Elden Ring\game on the drive where you installed the game. Find the start_protected_game.exe file and rename it to something else with the extension “.not“. If you do this, the file type will be listed as NOT, and you will be unable to run the exe.

Next, locate and duplicate the eldenring.exe file. Rename it to start_protected_game.exe and launch the game via Steam. You will no longer be able to connect to the game’s multiplayer servers.

To be certain, a popup on the main menu should indicate that the game is “Unable to start in online mode“. If you see that, you’re in good shape.

We can now get started. Download the Elden Ring Mod Loader (open in new tab), a handy tool required to run many of the mods available on the internet. To obtain the tool, click the link below. After downloading, unzip the folder to Steam\steamapps\common\Elden Ring\game.

4. Add mods to your folder

Return to where you installed the Mod Loader once they’ve been downloaded. You should now see a new folder called “mods”. There are no prizes for guessing what happens next. Drag the mod you downloaded into that folder (you might need to extract it from a zipped file first).

Return to Steam and start the game normally. All mods that have been installed should be loaded. To remove a mod, simply delete its folder or file from the “mods” directory.

How To Install The Seamless Co-op Mod

Elden Ring fans can take a whole party of adventurers into the Lands Between thanks to a brilliant co-op mod, but only if they can get it to work. Here’s how to add mods to Elden Ring.

The Elden Ring seamless co-op mod is now available for public beta after weeks of anticipation. The mod is completely free to download and use, though some manual setup is required. The mod also modifies a few rules to keep Elden Ring challenging even with a full party of four. Here’s where to begin.

The first step is to download the Elden Ring Seamless Co-op mod (open in new tab). The beta version can be found on the creator LukeYui’s page. The manual can be downloaded by clicking the link below orange button labeled “DOWNLOAD”.

This will result in the download of a ZIP file containing two files:

Extract them to a location on your computer, then launch Steam. Right-click Elden Ring in your library and select Properties. When you hover your mouse over Manage, you should see an option to “Browse local files.” When you select that option, the Elden Ring folder will be displayed.

Then, in the Game folder, drag or paste the SeamlessCoop folder and launch elden ring seamlesscoop.exe. The two files should be mixed in with a slew of other information. The only thing left to configure is a password.

Select the cooppassword file from the SeamlessCoop folder. This will open a Notepad file with a password field blank. Choose something that would be difficult to guess at random. Then notify your fellow Tarnished and instruct them to use the same password in their own cooppassword files.

It’s finally time to begin seamless Elden Ring co-op. Return to the Game folder and run launch_elden_ring_seamlesscoop.exe to start the game. Create your character, then go through the summoning tutorial at the beginning. All of the items mentioned will be automatically added to each player’s inventory. Hosts must use Tiny Great Pots, while joiners must use Malenia’s Effigies. To exit the session, use Separating Mist.