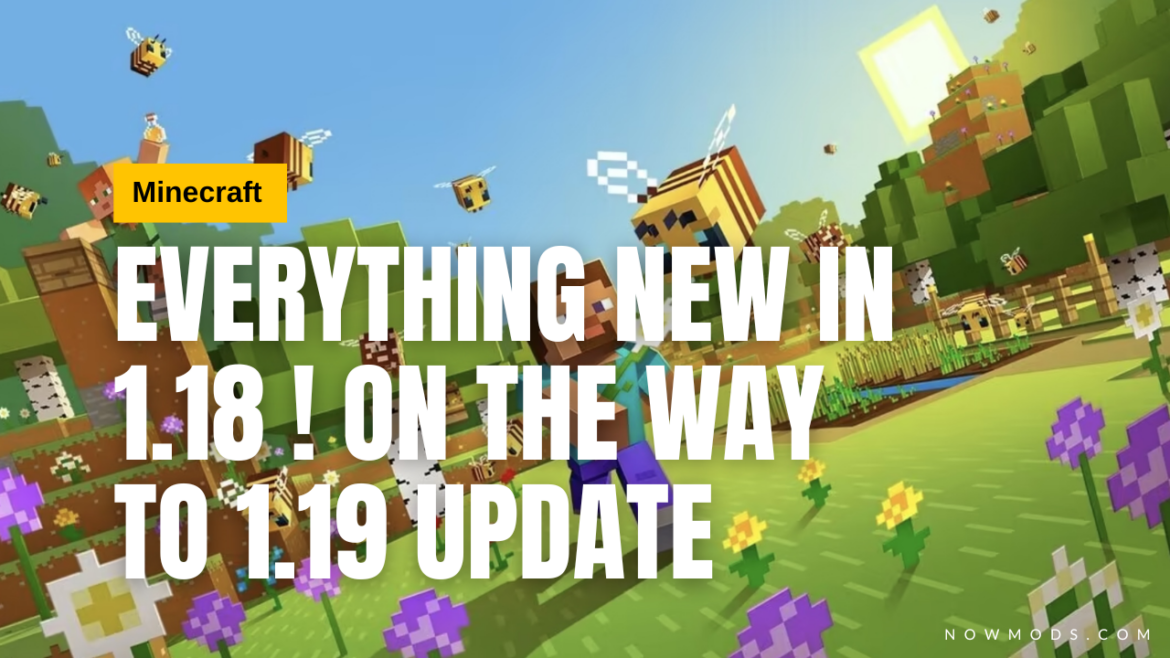 Finally, the Minecraft 1.18 update is here. The remaining adjustments are introduced in Part 2 of Caves & Cliffs. what Mojang had initially intended when proposing the significant upgrade in 2020. As you might anticipate, there are new blocks and objects as well as mountain and cave-based biomes. Many of the creatures and flora found in the new biomes have already been introduced in version 1.17. But now they will all produce organically in their appropriate residences.

We regrettably learned at this year’s Minecraft Live event about the large, ominous Wardens. Additionally, the Deep Dark biome from this release has been postponed. The 1.19 Wild Update, that Mojang has said will arrive in 2022, will now include them.

In general, caves have undergone a full transformation. allowing them greater space to produce and integrate into the new specialized biomes Aquifers or water sources that are not reliant on the sea level may be found in many caves. From Y=0 to Y=-7, deepslate will take the place of stone. Three additional noise cave kinds have also been introduced:

Although caves are not new to Minecraft, they are often dangerous, especially if you happen to stumble across an abandoned mine. All of that changes with the Lush Caves biome. However, there may still be risks to be aware of. Minecraft 1.18 feels much more welcome thanks to this new biome. adding a lot of plants to a place that would otherwise be sterile.

Axolotls in Minecraft are most frequently seen in lush caves. Only cave vines and subterranean water sources now contain this substance. There ought to be plenty of drip leaves and glow berries in this area. Lush Caves’ exact position will be obvious. By the azalea trees in the overworld landscape that tower over them.

The second new biome is covered with dripstone blocks and pointed dripstone. Stalagmites and stalactites will emerge as a result, adding some variety to the often blocky environment. These caverns’ spikey interiors are made of pointed dripstone. It behaves similarly to vines, entirely breaking if one segment is damaged.

You should be aware of any potential risks presented by this environment in Minecraft 1.18

Blocks and items in Minecraft 1.18

There were many new blocks and objects included in the first half of the Caves & Cliffs update. But the large biome and world creation modifications are the main emphases of release Minecraft 1.18. Ore Veins are the major new update on the block and item side.

When discovered, the snake-like ore formations known as iron and copper ore veins should provide a large quantity of precious ore. Ore veins that have Y=0 and above contain granite and copper ore. You may get iron ore and tuff from the ore vein below Y=0.

Lena Raine’s music will continue to be added to Minecraft 1.18. The survivor mode will now include five brand-new tracks corresponding to brand-new biomes. Strongholds and dungeons now contain a music CD named “otherside.”

Many features in Minecraft 1.19 will receive updates with new functionality. New biomes and modified mobs are included in this.

The addition of all the new biomes to Minecraft 1.19 is its first and most interesting feature. Deep Dark Caves and Mangrove Swamp are the only new biomes that have been officially announced by Minecraft so far. However, we may anticipate 1.19 to enhance a number of in-game biomes, as proposed in Minecraft Live 2021.

The update’s primary goal isn’t just to provide the game with a ton of brand-new stuff. Instead, as its name implies, the wild update is meant to improve Minecraft’s native biomes and animal life. Use this list of the new biomes in Minecraft 1.19 to learn more about their characteristics.

The new mobs will undoubtedly wow you if the updated biomes don’t. Early leaks, test screenshots, and the overall design of the 1.19 update to Minecraft. Indicate that several new wild groups could be seen. There are several biomes that don’t have specific biomes that are suited to them, like deserts, marshes, and savannas. Therefore, if the Wild update lives up to its promises, we could encounter new enemies in each of them.

Here is a comprehensive list of the verified new mobs added in the 1.19 version to Minecraft. Using our connected guides, you may read in-depth information about each of them.

The following four new tunes are being added to the game in Minecraft, as with most updates:

These musical selections may be heard on the game’s main menus and in some biomes.

You may already play a range of music CDs in your world’s jukeboxes in Minecraft. However, the wild update broadens this choice by including a special kind of music disc. Unlike other discs, you may locate it in the Ancient Cities as shattered bits called disc fragments. Using a crafting table, you may assemble nine disc fragments to create the one-of-a-kind disc with a deep, gloomy theme.

How to Get the Latest Minecraft 1.19 Update

For Java Edition users, updating to the most recent game versions is rather simple. The launcher for Minecraft: Java Edition is the same on Windows, MacOS, and Linux.

As soon as The Wild Update is made available to players on June 7, they may use the Minecraft launcher to download it.

To obtain the 1.19 upgrade for Java Edition, follow these instructions:

The majority of consoles and mobile devices, in contrast to Java Edition, support Bedrock Edition. Depending on the device, different steps must be followed to upgrade the game. To the most recent version, 1.19 Wild Update.

Because Mojang has made the update’s release date known. To get the 1.19 version as soon as it becomes available, Bedrock users may turn on automatic updates in their game shops. Another option for players is to manually upgrade the game to version 1.19.

The Minecraft 1.18 new feature instructions and 1.19 details are provided above. Along with the most effective techniques for updating 1.19. We welcome you to our website where you may find important information.

Valheim Dragon Egg: How To Find and What To Do With Them?