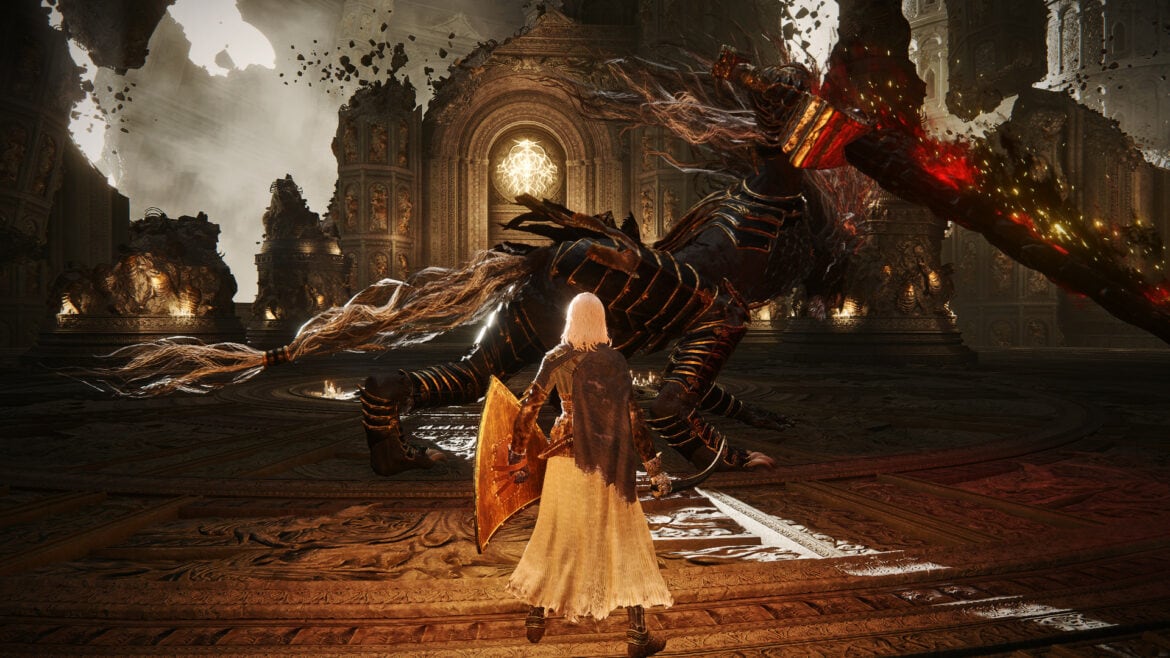 NPCs And Bosses Spirit Summons, including Melina, Malenia, Radagon, Selenium (without head armor), Millicent, and Lani, will be added as new exclusive items and can be summoned.
► Elden Ring best build for beginners

Version 3.60
1.04 is now supported. Many of the in-game texts have changed, but rest assured that the msgs are also 1.04 ones.
Version 3.51
Fix for problem of switching to Maliketh when Blaidd is enhanced.
If you have already enhanced the Blaidd, please discard it and purchase a new Blaidd.
Version 3.50
Morgott the Omen King and Blaidd the Half-Wolf were added.
Version 3.41
Fixed issue with Latenna and Tricia not being summoned.
Version 3.40
Added Maliketh, The Black Blade.I always wanted to add him.
It was very hard to get him to stay on the ground without falling, but I finally did it.
Fixed Godfrey’s name being “Goodinfo”
Version 3.20
Godfrey, First Elden Lord added.
Added description of Godskin Apostle.
Version 3.11
Fixes to summons (revert to 3.0).
Fixes to NPC’s gold signatures not being visible.
Version 3.1
Added Malenia, Goddess of Rot.
I lowered the HP of regular Marenia by 1/3 and also lowered her attack power. This will allow more skills such as Waterfowl Dance to be seen.
Version 3.0
・Instead of replacing the original Spirit Summon, we have added a new one. You can still enjoy the game with the original ashes NPCs And Bosses Spirit Summons.
・Godskin Apostle (Duo) is newly added.
・With the new additions, icons were added, and Japanese and English texts were written. I also wrote descriptions of the items.
I could have written the description without it, but I wrote it because I thought it would affect the immersive experience because the English would appear garbled if it was left as it was. I did not include speculation or discussion, but only facts, similar to Fromm’s writing.
However, the English sentences may be a little strange. I wrote this while looking up words and NPC conversations in videos and English-speaking wikis, but I apologize if it is still strange.
Version 2.42
Fixed a problem with Yapped erasing NPC summoner signs, fixed in 1.10.1, but if you are not near a summoner sign and can’t see it, please try it.
Version 2.41
Support for game version 1.03.3.
Version 2.4
All changes and additions to 2.3a, 2.3b and 2.3c. Mod Engine 2 is included for easier and safer installation NPCs And Bosses Spirit Summons.
Version 2.3c
Addition of Crucible Knight. Replaced by Oleg.
Ranni’s attack power was lowered slightly.
Version 2.3b
Changes and additions to Ranni’s magic.
Adjustment of Ranni’s HP and attack power.
Adjustment of Ranni, Sellen and Millicent’s field of view and attack range. (They will be less likely to charge at distant enemies themselves.)
Version 2.3a
The trio of Melina, Sellen, and Millicent was added to NPCs And Bosses Spirit Summons.
Added Ranni.To use Ranni, you need Ranni Skin for Tarnished
Version 2.3
Melina and Malenia’s agility of movement has quickened. They regain their original (Vanilla) quickness (that was my mistake, they were moving slowly).
Other adjustments.
Version 2.2
Added Rennala, Queen of the Full Moon.
Adjustment of sellen and millicent.
Version 2.1
The settings of the 5 NpcThinkParam to be replaced were partially set to be the same as the other ashes.
Fixed the problem that when Sellen and Millicent were given the royal scepter of Carlia and the prosthetic sword of Malenia, their exclusive techniques did not work properly. They are both cooler.
Made Sellen chanting speed faster. Master was too slow even though he is a genius.
Increased the endurance of Sellen and Millicent.
Version 2.01
Fixed that the uploaded Reguretion.bin was out of date and Duo did not work.
Version 2.0
Replaced Lone Wolf with Melina & Sellen (a duo).The ashes of the subhuman group were replaced by Melina & Millicent (a Duo).
Version 1.1
The strength of the ashes is now constant regardless of the enhancement value of the ashes NPCs And Bosses Spirit Summons.
Version 1.0
Release

I wrote the character name, text, and description in the game from 1 and made the icon similar to that character. These characters are purchased from Miriel of the Knotting Church.

Adjusted in consideration of in-game settings, depiction, and game balance. Adjustment of HP, cut rate, attack power, and AI of the added character.
The summoning range of ashes has been greatly expanded, and you can summon as many times as you like.

Selenium’s head armor was removed, and the weapon was equipped with a Carria scepter. The casting speed is a little faster than vanilla.
Millicent was equipped with a Malenia prosthesis.
Lani’s weapon is the scepter of Carria, and the magic is strong enough to be used by Lani, making it difficult to destroy the atmosphere. Handles a total of 7 spells. The casting speed is top class.

Selenium, Millicent, and Lani are equipped with two Holy Grail Bottles and will recover when they lose strength.

Since v3.0, the added characters can be purchased from Miriel of the Knotting Church

About adjustment for each character

Malenia …… Due to the specifications in the boss battle, Malenia will not shoot the waterfowl dance unless the HP is reduced by about 30% in both the first form and the second form. In the second form, it is scraped by about 70% before making a rotting dive.

So I set the HP low to use this attack as ashes. Also, the attack power is lower than other Demi Gods due to the large number of steps.
HP is easy to scrape, but there is also a regen, and if it is scraped, I made it a character that will be annihilated and recovered by the waterfowl dance.

Keep it up with Elden RIng mods with us right here: