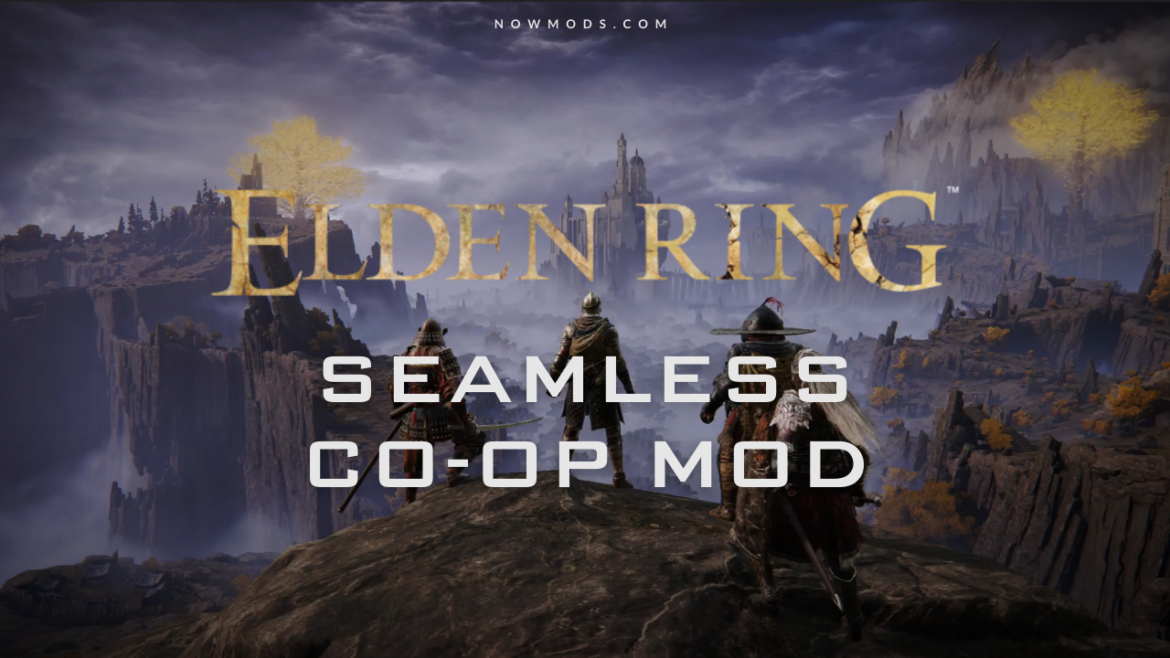 Please read the entire mod description before using it. Because the mod is currently in early beta, you are very likely to encounter bugs. If you find any, please report them to me as thoroughly as possible, and I’ll work to fix them in future versions.

Elden Ring is a massive game, and it’s impossible to test every possible path/combination a party could take through it. The beta’s goal is to pool resources, gather as much information as possible, and fix bugs as they appear. Bug fixes will be released on a regular basis.

If you are looking for a bug-free experience, this Seamless Co-op version is not for you.

This Seamless Co-op mod has a Discord !

Simply put, the Seamless Co-op mod allows you to play with friends without restriction throughout the entire game. With this, it is theoretically possible to complete the game from tutorial to final boss in a single co-op session.

Players may explore the entire game map (overworld, underground, legacy dungeons, etc.) together or separately. Marika’s stake is disabled in online play due to connection issues.

Along with the core functionality of this mod, you may be interested in the following quality of life enhancements:

This Seamless Co-op mod unquestionably simplifies the game. Invasions, the main disadvantage of cooperative play in the base game, are not possible with this mod’s design and thus have not been implemented. To compensate for this and keep the game challenging, the following mechanics have been added to the base game’s enemy health pool increases, as you would normally get with increasing phantoms:

Can this ban me?

No, the Seamless Co-op mod prevents you from connecting to FromSoftware’s matchmaking servers and uses different save files than the non-modified game. When using this mod, Easy Anti-Cheat is also disabled. This mod will not get you banned unless you modify it with the intention of connecting to vanilla players.

Because this mod adds new items not found in the base game, it employs a different save file than the standard ‘.sl2‘ extension. This means you won’t be able to access your Seamless Coop save files in the base game, and vice versa. If you revert mod save files to vanilla save files, you will most likely be banned.

It has not been tested for compatibility with other mods. Other mods may be used as long as they do not interfere with the multiplayer aspect of the game or modify any of the items used by the mod to function.

You are not required to uninstall the mod. When you want to play it, use the launcher; otherwise, run the game normally. Simply delete the files you downloaded from here to completely remove it.

Here’s an example of how your Elden Ring file structure should look if everything is in order:

I strongly advise using a secure session password; if a player knows your co-op session password, they can join right away. To play multiplayer with others, the mod relies solely on Steam’s matchmaking interface.

One player must host, and all other players must participate. You must share the same password as the person(s) with whom you wish to play (found in the “cooppassword.ini” file).

To start a session, the host must use the Tiny Great Pot. The other players can then join using the Effigy of Meleina. You should spawn somewhere close to the host. Any player can leave at any time by using the Separating Mist – If the host uses this item, the session is terminated and all players are disconnected.

Does this Seamless Co-op worked for cracked/pirated games ?

No, I’m also not going to be supporting these versions so please don’t make bug reports about it

Not necessarily, while co-op play does make the game objectively easier, it’s also a completely different way to play the game. There are plenty of “easy mode” mods (such as this Easy Mode for Elden Ring) out that that just give you high health/damage.
This mod will be easier but is made in mind of those who want to play the game the whole way through with friends. It has been designed with fun in mind as opposed to reducing the challenge.

Invasions are not possible in this Seamless Co-op mod. You’re not connected to the matchmaking server so can’t be invaded by anyone else. This isn’t a design choice, it’s just the way it has to be to keep modded players separate from the vanilla player base.

Can I use my save game from the base game?

You can, although it would require more work. As mentioned the mod uses separate save files by using the “.co2” file extension instead of “.sl2.” Make a copy of your .sl2 file, then change the new copy to .co2. Once ingame, using Cheat Engine, spawn the new mod-specific items. Do not do this the other way around (moving your save from the mod to the base game) as you may get banned.