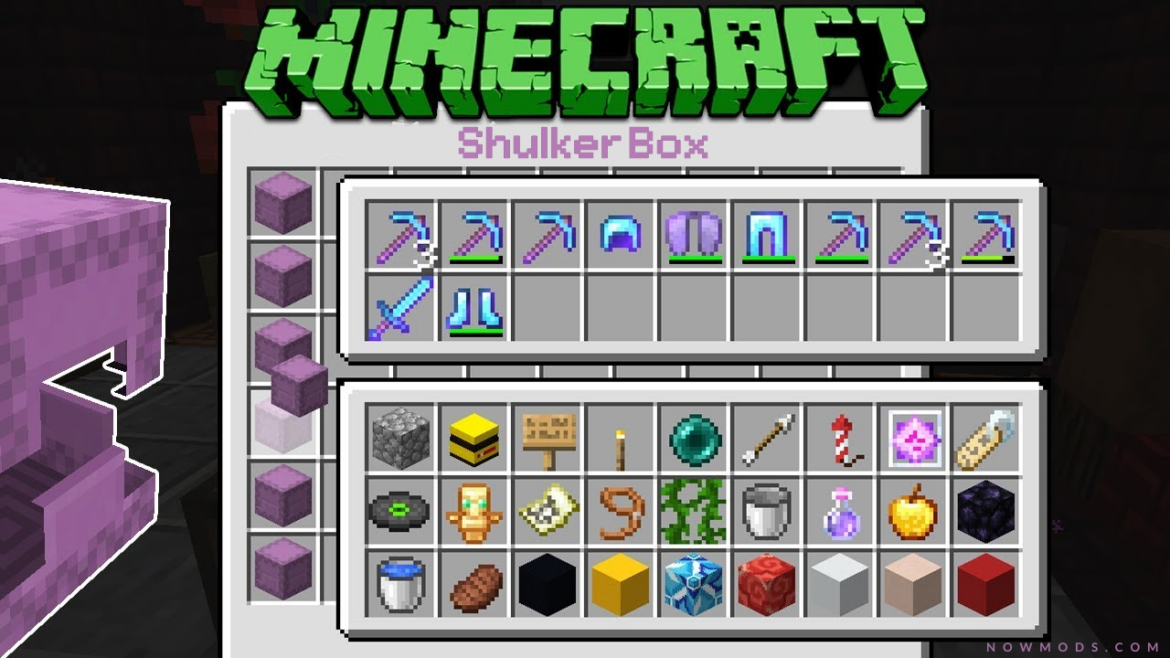 There are so many objects to save for your inventory menu that finding them all in a single match is difficult. These things can be kept in a chest, but there’s a catch: traditional chests have very little mobility. Minecraft would be much more enjoyable if there were a means to move things from one spot to another, don’t you think? In fact, there is! All you need is a Shulker Box in Minecraft to accomplish this.

What is a Shulker Box?

In summary, the Minecraft Shulker Box is a practical block that gives users the freedom to store and move objects as they see fit. The mechanics of Minecraft place more emphasis on saving and keeping your valuable things than most realize. It’s difficult to see someone playing Minecraft on a Mac, Xbox One, PC, or Nintendo Switch these days. have no access to this block in their stock.

In the 2016 Exploration Update, Mojang made the decision to include Minecraft Shulker Box in game. However, a subsequent update for the Java Edition and the Bedrock Edition enabled players to choose the color of their Shulker Boxes.

What Can Shulker Boxes Be Used For in Minecraft?

You are aware of its capacity when you use the crafting menu to build a chest that will act as your storage area. A conventional chest can only provide you the equivalent of 27 inventory slots in terms of storage capacity. Additionally, these containers are not very safe since when they break, all of their contents spill out. Make a Minecraft Shulker Box and all of your issues will be solved!

Like regular chests, a Minecraft Shulker Box contains 27 inventory spaces. But in Minecraft, you won’t lose any of your priceless stuff if you destroy a Shulker Box. It doesn’t matter whatever version of Minecraft you use—Java Edition or another one. Everything will be contained in the Shulker Box. Magic? Science? Just Mojang is aware.

Before deciding to create a Shulker Box, every Minecraft player should be aware of a clever approach.

First, check our Ender Chest in Minecraft Tutorial if you don’t already know what they are.

You may create this item using the thorough instructions and the supplies listed there. Right now, an Ender Chest may ship its contents anywhere around the globe. What would happen if a Minecraft Shulker Box was constructed and placed inside an Ender Chest? We’re referring to a sizable amount of storage in a single location.

Now, it’s not as simple to build a Shulker Box as it is to make other kinds of chests.

Prior to going to a crafting menu, first. You should be aware that visiting The End is the only way to create Minecraft Shulker Box. You may already be familiar with The End dimension, a gloomy location where fearsome foes like the Enderman are just waiting to rip off your head. Follow this instruction, take your sword, and let’s head to The End without being terrified.

Additionally, using a Give Command, Shulker Boxes may be produced. For all versions of Minecraft, the Give Command is the same, making it a rather simple process. Use the command /give @p shulker_box 1.

Shulkers may be found in End Cities

You cannot avoid End Cities in Minecraft if you wish to create a Shulker Box. But more crucially, in order to get their Shulker Shells, you must track down and kill Shulkers. Since these creatures frequently teleport when they feel danger, they are challenging to destroy. However, there is no other way for you to get a Shulker Shell except killing a couple of them.

A Shulker Box is dyeable in any hue! You can now personalize and even recognize your boxes thanks to this. Simply place the Shulker Box next to any kind of dye on the crafting table to do this. Place a cauldron there and fill it with water to wash off the hue. You’ll observe how the water level will decrease after the Shulker Box is placed within the cauldron, resulting in the color’s disappearance. We hope you enjoyed reading this article on the Minecraft Shulker Box!

How to dye minecraft shulker boxes – All colors recipe:

The video game Minecraft is really engaging. It is playable on the Nintendo Switch, Mac, Xbox One, or PC. Even with the mobile version, gamers will never run out of things to do. One of the finest aspects of this video game is that there is always something fresh to build.

You must have a basic grasp of the Minecraft Shulker Box. How to manufacture them, where to find them, etc. Even giving them color. What are you waiting for, then, to start playing? Consider reading some of the website’s other articles if you want to learn more about Minecraft and MPCE Addons.

Everything You Need To Know About Ender Chest in Minecraft

Everything You Need To Know About Redstone Lamp in Minecraft