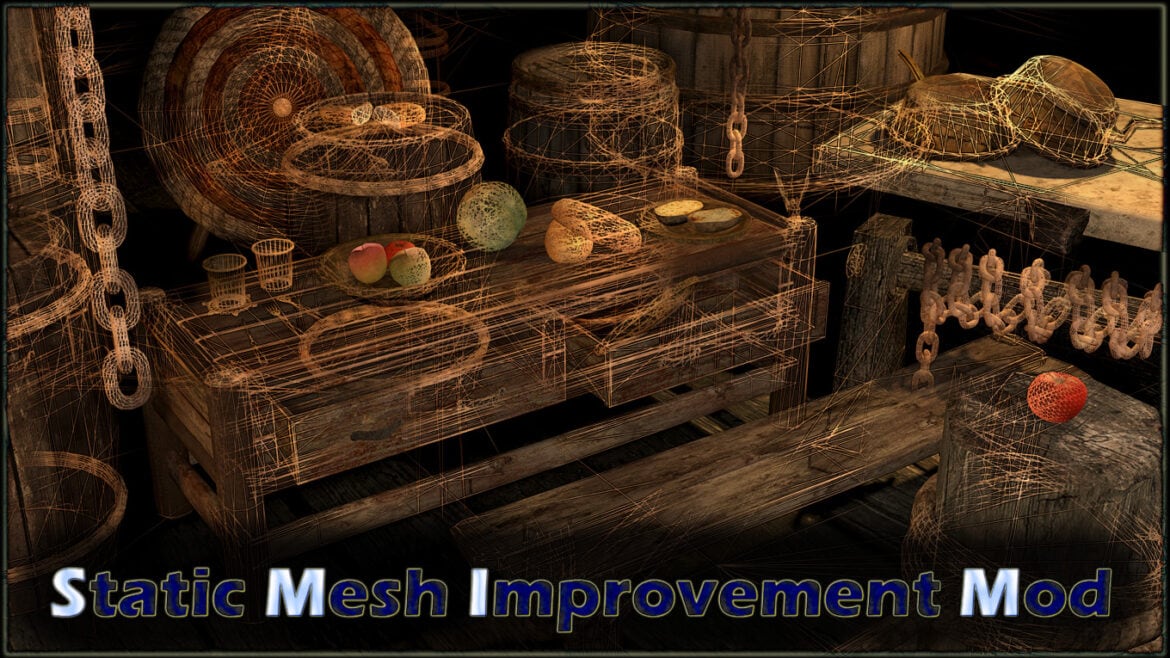 Static Mesh Improvement Mod is a massive project to greatly improve the appearance of Skyrim’s countless static 3D models. Essentially, this is my attempt to improve the architecture, clutter, furniture, and landscaping in Skyrim.

This Static Mesh Improvement mod does not have any known dependencies other than the base game.

Author notes
As of June 2017, users have permission to use SMIM assets freely in any mod. You can create any compatibility patches or add-ons that you want using Static Mesh Improvement Mod stuff. You can upload SMIM to another site if you want. Thanks to everyone for using SMIM.

Skyrim is the best open-world RPG ever made, with amazing 3D character and creature models. However, playing the game for even an hour revealed that Skyrim contains a plethora of ugliness in the form of 3D models. More specifically, the architectural elements, clutter, furniture, and landscape objects are made up of a large number of low-polygon static meshes.

While the artists appear to have spent a significant amount of time creating the races, creatures, armors, weapons, and major buildings, it appears that the more “boring” 3D models that comprise the game world were severely neglected.

As a result, this mod modifies many 3D models in order to improve their appearance and to fix many of the ugly seams and other oddities. I began in February 2012 with the goal of eventually improving 500 of the worst offenders. My goal of 750+ meshes was met in June 2014; my goal was exceeded! Static Mesh Improvement Mod now includes over 15,000 mesh placements! Over 900 meshes were improved in October 2016, with over 30,000 placements! Cool.

Nonetheless, Static Mesh Improvement Mod has more work to do! It takes a long time to improve meshes, so I’ll release incremental updates with new 3D models as I finish them.

My mod includes a fancy installation script that allows you to pick and choose which parts of SMIM you want to use, as well as various texture options. Please try the various options through Nexus Mod Manager before requesting them!

The Official High-Res DLC is OPTIONAL, but only a moron would refuse to use it. This DLC is COMPLETELY COMPATIBLE WITH Static Mesh Improvement Mod. Simply download the High-Resolution DLC from Steam and activate the.esps. Download the Unofficial High Resolution Patch as well.

The Unofficial Skyrim Legendary Edition Patch is recommended (use the Skyrim Unofficial Patch if you don’t own all of the DLC expansions). Because USLEEP is a BSA package, the loose files in SMIM will always take precedence during installation.

If you use WATER (now included in The Ruffled Feather) or Realistic Water Two (both highly recommended! ), install it AFTER SMIM and let it overwrite all SMIM files. Make sure there is no water when using the Riften 3D ropes added in Static Mesh Improvement Mod 1.90. If you install the file AFTER (below) SMIM, you may get minor water seams by the Riften docks.

Install SkyFalls and SkyMills BEFORE Static Mesh Improvement Mod and then let SMIM overwrite all files if you use them (recommended). Otherwise, one of the windmill fans will remain in two dimensions.

If you use Better Dynamic Snow (which was previously part of The Ruffled Feather and is now part of S.T.E.P.) (which is highly recommended! ), follow the instructions and choose which parts you want. His 2D fence is incompatible with my 3D version, so don’t install it. Make certain that the Better Dynamic Snow SMIM option is enabled in his installer.

Install rheadude’s Ultimate HD Fire Effects first if you intend to use it! Then allow Static Mesh Improvement Mod to overwrite all of your files!

Install it first if you use kryptopyr’s Complete Crafting Overhaul Remade or Tytanis’ Jewelcraft! Then allow SMIM to overwrite all of your files!

If you use texture mods, such as Skyrim HD, install Static Mesh Improvement Mod first, then the texture mods, allowing them to overwrite the few files that may conflict with SMIM.

Allow SMIM to overwrite everything if you use Mindflux’s ENB Particle Mesh Fixes because SMIM already includes all of his fixes.

Manual Installations and Other Notes

Because Static Mesh Improvement Mod folder structure is so complex, manual installations are strongly discouraged. If you defy all logic, you can download the SMIM archive and then extract the contents of the “00 Core” folder to “SkyrimData.” This will install the mod’s foundation.

The additional folders beginning with numbers are optional features. If you want one of those options, extract the folder’s contents to “SkyrimData.” Folders with the same number are either or, so you can only extract the contents of one of them. Use NMM or Wrye Bash if you can’t figure out the numbering and folder descriptions. Versions 1.11 and up include an.esp file. Make certain that it is turned on.

To distinguish itself from vanilla textures, Static Mesh Improvement Mod employs a slew of SMIM-specific new textures housed in the “textures-smim” folder. These SMIM-textures always take precedence over any other texture replacers you may be using. This means that the majority of the meshes I edit will use MY textures rather than those of other texture replacers you have installed. This isn’t a big deal because my SMIM textures are intended to blend in with the base game and other high-resolution texture packs. Just keep in mind that when using Static Mesh Improvement Mod, you will have to use my textures for the majority of SMIM’d meshes.

SMIM also includes several edited vanilla textures (with which I fixed errors), which do conflict with texture replacers. You just need to decide whether you want my fixed vanilla textures or the versions of your favorite texture replacer. Installing Skyrim HD first, then SMIM, for example, will result in SMIM’s fixed vanilla wood post texture. You’ll get Skyrim HD’s wood post texture if you install Static Mesh Improvement Mod first, then Skyrim HD. None of this is detrimental to your game. Just keep in mind that you should always install Static Mesh Improvement Mod first, followed by texture replacers.

What is the performance hit?

It is zero for me. I was running a 3.3GHz i2500k Intel CPU with an nVidia GeForce 680 with no performance hit in 2013. Users with slower computers may suffer a performance hit. I’m not interested in creating low-polygon models. Every model I’ve included is more detailed than the stock model. Some of my meshes are a LOT more detailed, perhaps even overkill. Maybe I’ll go back and reduce polygons later. For the time being, try my mod, note where your FPS drops (if any), and manually delete certain of my meshes if desired.

What textures do your models use?

When possible, I use the default vanilla textures so that texture replacers will work properly with my mod. However, some models necessitate the creation of custom textures to fit my new awesome 3D models. In this case, I use my discretion to determine which texture source is best: vanilla, Skyrim HD, or a new custom-made texture created by me. This means you can’t simply replace textures for my objects with a texture replacer. My non-vanilla textures, on the other hand, are all quite high-resolution. For more information, see the texture replacer section above.

I don’t like one of your 3D models or textures. How do I solve my issues?

If you don’t like a particular 3D model I’ve included, you can remove it manually before or after installation. You’ll have to hunt it down and remove it yourself. If you don’t like my textures, you’re stuck with them because other texture replacers won’t work with most of my 3D models. If you ask nicely, I might be able to make an alternate texture that is more to your liking.

Will you improve/fix a certain 3D model?

Maybe, post in the comments and tell me what you want fixed and why. But don’t post spoilers!

Why don’t you just enjoy the game as it was made?

Because I’m OCD. I notice seams, low-polygon models, and other offenses to good artistic design. It’s my burden really. I wish I was ignorant of all this, but alas, I know too much…

For more Skyrim mods, check out these ones: