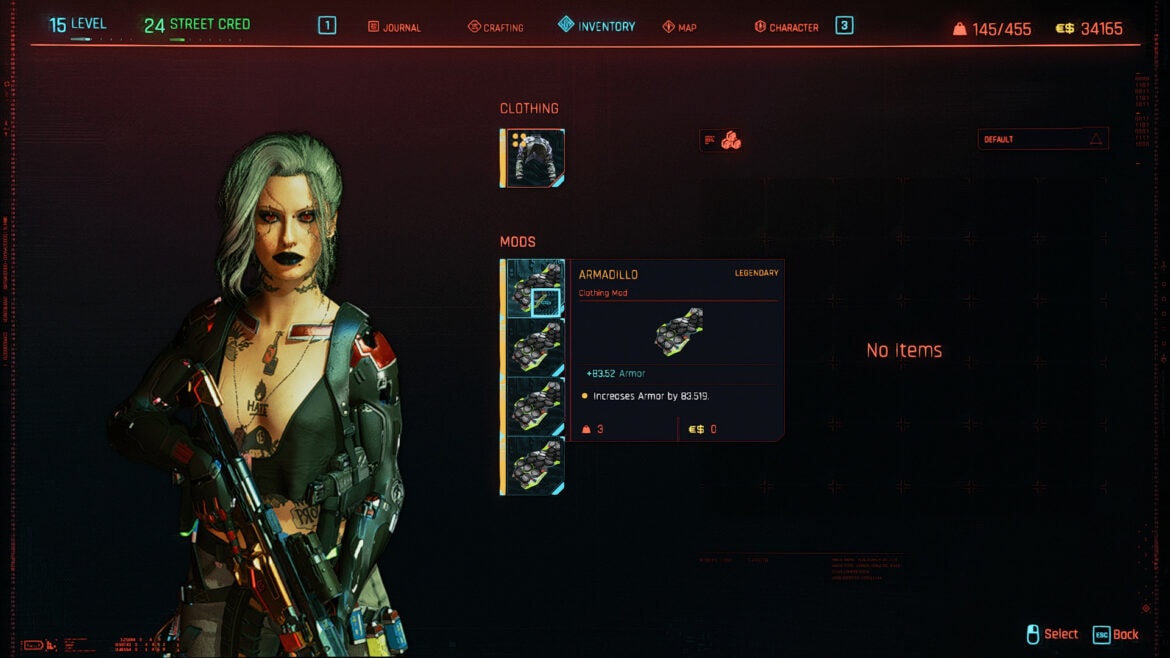 The Edgerunner Bazaar is a mod menu to be used in conjunction with cyber engine tweaks to elevate your current weapons, clothing, and mods to legendary status. It also boosts your item stats and provides spawn buttons for every piece of clothing and weapon in the game. Along with every weapon, clothing mod, and recipe. There are also buttons for removing quest flags.

Author’s instructions
You can use Edgerunner Bazaar for whatever you want as long as you credit Expired for his script and me for the rest.
And don’t turn on DP or ask for donations; that’s his only requirement for using his work.
If I see you attempting to profit from his work, I will report you.

File credits
Credits to Expired for the first iteration of the upgrade script
Credits to Yamashi for Cyber Engine Tweaks.

(had to remove the quest flag button and the mod upgrade button, those will come with a newer version of CET, stay tuned)

You gonks, pay attention! Do you need a new iron or some killer threads? Take a step up to The Edgerunner Bazaar.
We’ve got everything you aspiring Deckheads and Samurais need to look good and kick ass.
Without us, you won’t be able to make it to the big leagues.
It makes no difference if you’re Bourgie or a Corpo sellout. We have what you require.
And if we don’t have it, you don’t want it.
All sales are final…. are you still with us? What’s going on behind you?!!

We now have a way to convert your equipped items to legendary without having to go into the save editor and potentially mess something up, thanks to Expired. Even items that do not normally spawn as legendary.

I combined all of the scripts into a single mod where all you have to do is press a button to get the desired effect.

Use only one of the main files. One is free, while the other costs eddies to use.

You can now upgrade and degrade your items from uncommon to legendary and vice versa.
This also increases the stats of the items, so armor on clothing increases and damage on weapons increases (it always did this, but some people didn’t realize it).
You can also improve your clothing, weapon, quick hacks, and cyberware mods (quick hacks and cyberware mods are off by default)
(Only mods with legendary counterparts will gain stats; the rest is purely cosmetic.)
There is an ammo spawner as well as a crafting material spawner.
In addition to every spawnable weapon/clothing/recipe in the game.
Every weapon Edgerunner Bazaar mod and clothing mod (that works) has also been added as a spawnable button.
(There is also a text file with the same items in it, so you can spawn them on your own if necessary)
(A brief list of the items contained within the pop-up tooltip)
Finally, you can remove the quest flag from items that prevent you from stashing and breaking them down (the yellow exclamation point in the gun’s corner) (this does not work on thrusters and epilogue clothing that stays equipped, you need to use a save editor to remove those flags)

New Cyber Engine Tweaks versions are always available here. (the first one can be downloaded)
Make sure to perform a clean install, which means deleting any previous files and not simply dragging and overwriting.
Before downloading the new version of CET, make sure to completely uninstall the previous version and delete all files.
When you first launch the cyber engine tweaks, you will be prompted to select a keybind. If CET does not appear, you did something wrong.

Make sure to use hardlink deployment with vortex when installing my mod and CET. If you don’t see the function, make sure the game’s mod folder is on the same partition as the vortex mod folder.

Unzip the Edgerunner Bazaar file anywhere on your desktop for manual installation.
Drag the bin folder to your cyberpunk directory and overwrite any files (for first installs, it will only be replacing folders, not any files within them)
This is how it would look. (If you’re updating your mod, make sure all previous files are removed.)

After you’ve installed the mod it should look like this.

Otherwise install Edgerunner Bazaar with vortex. If installing with vortex from a previous version, make sure all previous files are deleted.

The CET window now appears automatically in the menu. When you first install the most recent CET, you will be prompted to select a hot key for CET; once you have done so, pressing that hot key will bring up CET and my mod menu.

You can then assign a hot key to this mod in the settings section, but this isn’t strictly necessary. You can activate it with a keybind, but you won’t be able to interact with it until the CET overlay window appears. (The hot key for mod menus is only active when the CET overlay is turned off.)

Dofile scripts were removed and consolidated within the mod itself; any old files will be moved to the old section, with no support provided. Dofile is depreciated in accordance with CET.

Skippy will start the quest as soon as you finish the lockdown, so spawning him before then will result in him being silent.

This is how your console should look after pressing one of the equipment upgrade buttons. This will let you know if it’s working or not.
Unequip the other items if you only want to upgrade a few. If you only want to upgrade a few mods, put the rest in a trunk, your stash, or on the ground. Then, run the script and pick them up again. (Note that Edgerunner Bazaar this does not increase the stats of mods that do not have a higher rarity; it is primarily a cosmetic change to make your items look more uniform.) Armadillo mods, on the other hand, will become legendary in terms of stats (keep in mind that they are scaled to your level).

To all the fans of this gameplay, here’s more Cyberpunk 2077 mods you may also like:

It’d be nice to know how to use the mod. Like what button to press to upgrade, where to go to get the Bazaar enabled.. like, I can’t even tell if the mod is installed right. Nothing is different.