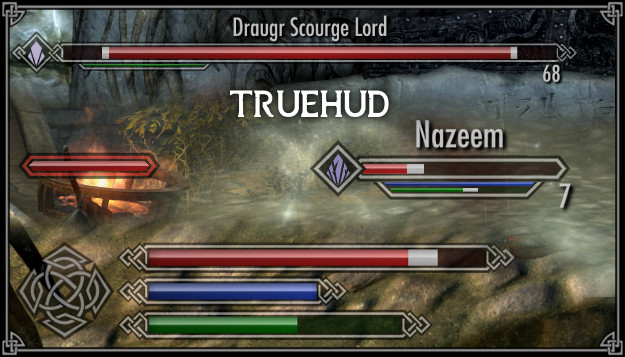 HUD Additions mod formerly included in True Directional Movement are completely reworked and improved! There have info bars that are customizable actors, boss bars, a player widget, a recent loot log, and an API for other plugins to use. Modular and customizable through MCM.

TrueHUD – HUD Additions started existence when can not anymore to rationalize adding more unrelated HUD elements to True Directional Movement. So to make it better I moved all the HUD components to a separate mod, while also reworking and improving them.

The plugin will also serve as a sort of hub for my (or someone else’s) other SKSE plugins that want to add and control HUD widgets.

This is a small animated widget that shows the enemy’s health, optionally, and other things. Players can be toggled per actor types such as current target, enemies, teammates, and others.

This feature will show certain enemies’ health that you encounter in a form of a big, static bar on your screen. Share a lot of the features with the floating info bars, but they can be configured independently. The screen position can be freely changed through the MCM, and there’s an option to either displace the subtitles upwards or disable the compass while a boss bar is visible so the bar can find a good place on your HUD.

There are two settings presets available to load for your convenience:

A configurable maximum amount of boss bars that can be displayed during fights with multiple bosses. If you’re fighting even more bosses at once, a queue will form, and after one of the currently displayed bosses is defeated, another will take their place.

A flexible system that allows configuration by the user and the creation of compatibility “patches”. It uses .ini files placed in Data/SKSE/Plugins/TrueHUD. (To maintain compatibility, .inis placed in Data/SKSE/Plugins/TrueDirectionalMovement will be read as well). It will read all the .ini files in this folder, so you can have multiple .ini files that won’t conflict and will not require manual merging. Feel free to create and upload custom .ini files to add compatibility to mods that aren’t handled correctly by default. The default configuration file should hopefully handle most of the cases and is hopefully self-explanatory.

If you would like to add more things to the .ini instead of editing the base one include the mod, create your own .ini file (better with a unique name so that it not make conflict with any other.) and include only new stuff with the [BossRecognition] header. The plugin will read all the .ini files found in the folder and merge everything together.
If you want to disable some records from the base .ini, you can add them in your custom .ini as ‘RemoveRace‘, ‘RemoveLocRefType‘, ‘RemoveNPC‘, and ‘RemoveNPCBlacklist‘.

Include health, magicka and stamina bars, an animated shout cooldown indicator and an enchantment charge meter. The player widget is intended to replace the vanilla HUD meters, with improved animations and toggleable ‘lazy’ phantom bars, and configurable positioning and width.

These items you acquire will be shown on the recent loot list for the short while. As usual, there are a bunch of settings that can be accessed in the MCM and widgets can be set up so it’s also visible in certain menus, like the crafting menu or the barter menu.

The original messages informing you that an item has been added to your inventory can optionally be skipped. The item icons require SkyUI to be installed. They won’t show up if it’s not.

Requires other plugins to use it! TrueHUD – HUD Additions bar that can show up above the health bar. A plugin that uses this mod’s API can request control over the special bars and provide functions that will provide the current/max values for the bar. For example, it could be used as a stunning bar similar to the one in games like God of War or Assassin’s Creed Valhalla.

If your mod use this feature, show the list below:

Check more other cool mods for Skyrim below: