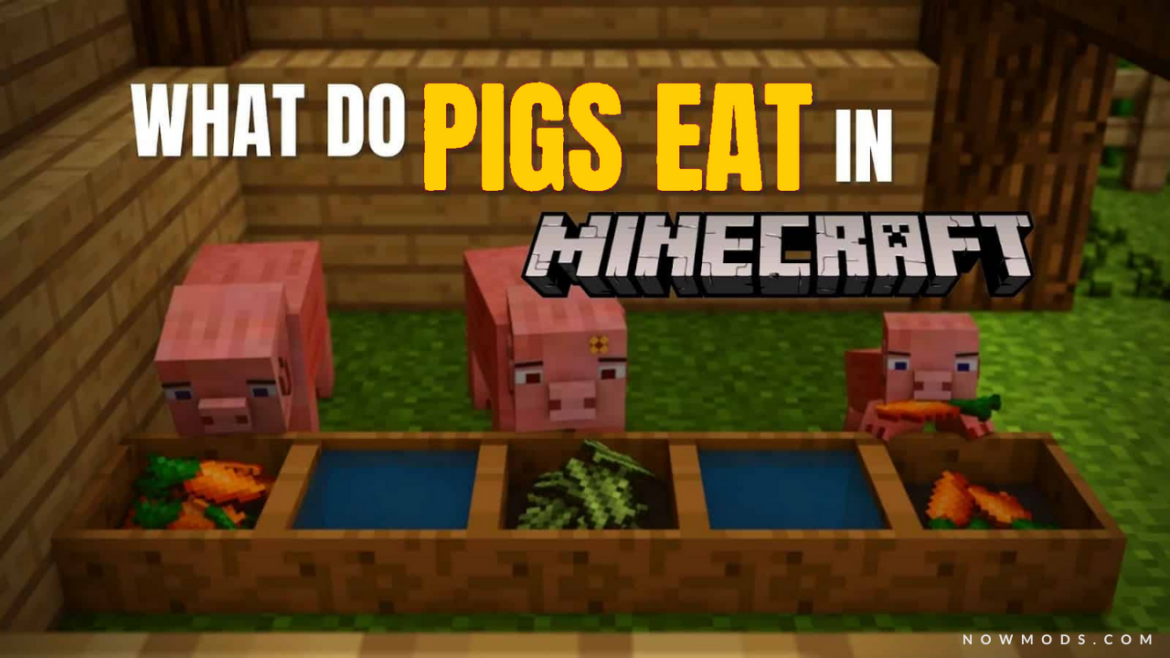 What Do Pigs Eat in Minecraft ? How to find food for them

In Minecraft, a carrot, potato, or beetroot is required to feed a pig. These veggies are extremely common in Villages, and pigs adore them. You may even create your own farms once you’ve obtained some. So there’s a chance that the question What Do Pigs Eat in Minecraft has been partially addressed. Join Nowmods to discover more about what pigs consume.

What Do Pigs Eat in Minecraft ?

Carrots, potatoes, and beets are the only things that Minecraft Pig will eat. They are all quite likely to spawn on the farms of villages. Other methods exist to acquire what Do Pigs Eat in Minecraft. Looting villages, however, is by far the most effective and profitable strategy. The Villagers don’t mind at all, which is much better!

There is a 50% chance that a village may appear in the Java Edition of Minecraft around 500 blocks of your world spawn point. This likelihood is 66 percent in the Bedrock Edition, though. Additionally, the biomes that Villages may spawn in vary slightly across versions. For the Java Edition, the following biomes can generate Villages:

The Bedrock Edition may produce villages in the following biomes in addition to the ones mentioned above:

How to Get Pig Food

What to feed pigs is already known to us. So where do you get those foods from? The guidelines are listed below.

How to Get Carrots

On a village farm, you have a 20% chance of coming across carrots. Carrots may be harvested like all other crops by being broken with a tool or with your hands. A block of fully developed carrots will release 2 to 5 carrots as drops when it is broken.

For a farm, if you wish to grow some carrots. All you have to do is hoe the ground and plant a carrot there. after planting it in the carrot on the tilled soil. You must confirm that there is water close by. The carrots won’t grow if that happens. The color of the soil may be used to predict when plants will develop; dark brown soil is fruitful. Be patient since carrots go through 4 obvious development phases. When their orange bodies may be seen peeking out through the soil, they have reached full maturity.

You could possibly come across a Carrot in a mob’s dropped items. When vanquished, Zombies, Husks, and Zombie Villagers have a 0.83 percent chance of dropping a Carrot. Additionally, some buildings, notably Shipwrecks and Pillager Outposts, include Carrots as treasure. 3 to 5 Carrots may be found in a Chest with a 57.5 percent appearance rate in Pillager Outposts. The Supply Chests in Shipwrecks have a 42.1 percent chance of containing four to eight carrots.

How to Get Potatoes

Similar to carrots, there is a 20% possibility of discovering potatoes on a village field. A fully developed potato block will drop one to five potatoes when you harvest it.

Similar to carrots, planting potatoes only requires a few minutes of waiting after placing the seed in some healthy soil. When your potatoes reach the fourth stage of visible growth and are completely grown. Yellow bulbs will be visible at the base of the leafy section. Just be cautious since a 2% possibility of receiving a poisonous potato exists. This, if consumed, will naturally make you sick.

A potato is also available as mob loot. Additionally, 0.83 percent of the time after defeating a Husk, or Zombie Villager. The resemblance to carrots is furthered. Potatoes arrive in chests at a rate of 57.5 percent in Pillager Outposts. However, you can locate two to five of them. Supply Chests in Shipwrecks have a 42.1 percent chance of containing 2 to 6 Potatoes. Fortunately, Village Chests can also store some Potatoes, namely 1 to 7. Additionally, depending on the biome, appearance rates range from 60% to 70%.

How to Get Beetroots

You have a 10% chance of discovering beetroots on a village farm, which is less likely than finding either potatoes or carrots. One beetroot and one to four beetroot seeds are dropped when a beetroot block is shattered. This crop will require more time to grow than others due to its low yield.

By sowing beetroot seeds in rich soil, you may create a beet farm. subsequently awaiting the emergence of some brownish-purple bodies as they enter their fourth development stage. It is important to note that beetroot grows slightly more quickly than other crops. The yields of beetroot are higher than those of many other vegetables, although not by much.

Mobs cannot drop either beetroots or beetroot seeds. However, a Wandering Trader will sell you 1 Beetroot Seed for 1 Emerald. Furthermore, there are several distinct structures where you may locate beetroot seeds.

If you’ve read this far, it’s likely that the question What Do Pigs Eat in Minecraft has been addressed, right? Additionally, this method of obtaining a lot of food is both exciting and challenging. However, we wish you a pleasant time and recommend you to visit https://mcpeaddons.com/ website for more awesome Minecraft content.