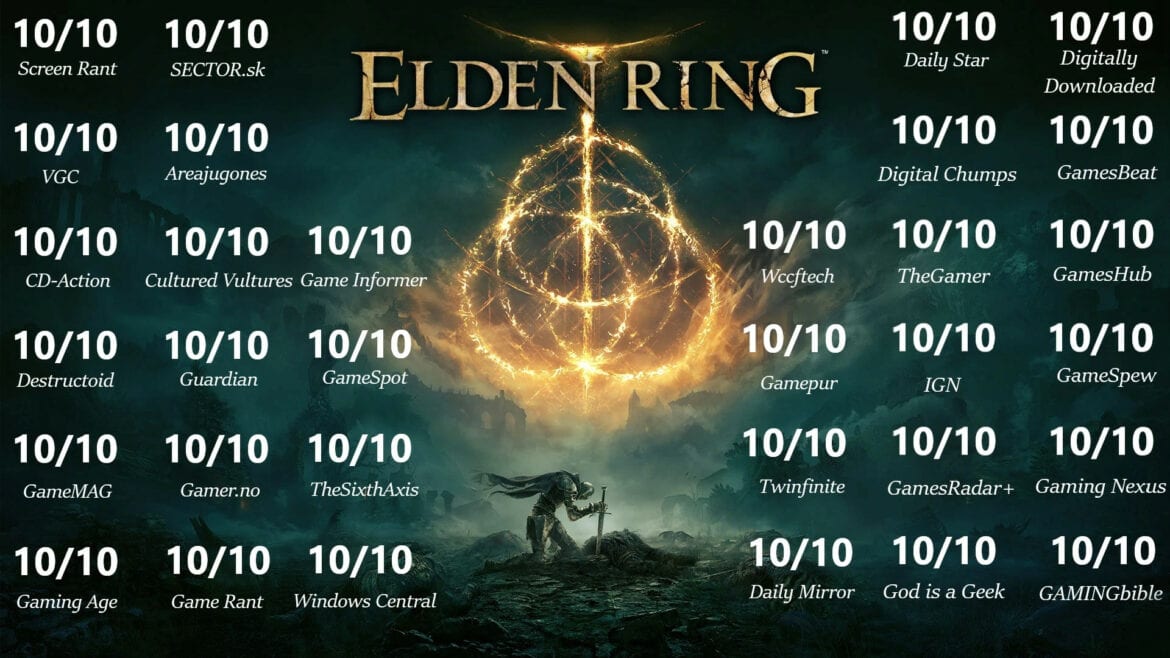 Even if you’ve never played Dark Souls, you should try Elden Ring

Elden Ring was released at 25 Feb, 2022 on Xbox One, PlayStation 4, and PC, is an acclaimed spiritual successor to Dark Souls, a franchise that revels in its difficulty to a sadistic degree. Beating a Souls game requires perseverance, dedication, and skill. It’s a source of pride.

A personal opinion about Elden Ring

One of my favorite adolescent memories came from Kingdom Hearts 2. Especially during a tense battle with Sephiroth. The iconic villain of Final Fantasy 7 was an optional “superboss” that you unlocked after beating the game. He was a true jerk, with a massive health bar and a long sword that could kill you in one hit. My friend and I pulled an all-nighter one Saturday to try to beat him. We passed the controller from one to the other after each death from midnight to 7 a.m. I did it as the sun began to peek through the blinds in my bedroom. Sephiroth was killed. My sleep-deprived bones were nourished by victory.

As I played through Elden Ring, I reflected on that night a lot. Every corner in FromSoftware‘s latest game contains a mini Sephiroth.

I know because I’ve never completed a Souls game. In fact, I’ve been too scared to play them. You might be in the same boat as me, intrigued by Elden Ring but also apprehensive. I can tell you with absolute certainty, after spending over 60 hours on Elden Ring, that you should be afraid.

Some fears, however, are worthwhile to overcome.

Elden Ring is written with the help of George R.R. Martin. Queen Marika shattered it into seven Great Runes, a ring with vast but hazy mythical powers. Those Runes were given to each of the Queen’s demi-god offspring, who then waged war against one another to secure all Great Runes and reforge the Elden Ring. The war, known as The Shattering, had no winner but did completely splinter The Lands Between, the setting in which you play. It is up to you to kill all seven demi-gods, reforge the Elden Ring, and ascend to the position of Elden Lord.

It’s much easier said than done. If you’ve never played a FromSoftware game before, the gist is that most enemies can kill you in one or two hits, and progress entails dying over and over. It’s a game of timing and coordination, but also of perseverance.

There’s a lot to take in, and it’s difficult to do so at first. Elden Ring is a massive ARPG with a plethora of features you’ll need to become acquainted with. You’ll select a class, which will determine which weapons you can use at first. There are melee, magical, short-range, and long-range setups to choose from. You’ll learn how to make items and consumables that improve specific attributes. You can summon monsters to fight alongside you. Enemies will be looted for treasures and resources. There’s a lot going on right now. What distinguishes Elden Ring from other blockbuster action RPGs is that all of this matters.

Consider CyberPunk 2077, another ambitious RPG with a wide range of weapons and play styles. The difficulty of that game does not necessitate a consistent play style. Despite the fact that there are hundreds of options, a simple katana/sniper rifle setup got me through the entire game with minimal difficulty; I didn’t experiment because none were required. However, in order to progress through Elden Ring, you must have your shit together. You must have the appropriate buffs, armor, and consumables attached and hotkeyed for quick use. You die all the time, but death teaches you a lesson: what you tried didn’t work, so try something else.

The RPG elements eventually come together. Combat is the same as it has always been. Elden Ring’s movement is clumsy; it’s not designed for you to hack and slash your way through a room; instead, it’s designed to make every strike, block, and quick roll count. In one sense, it took me about 12 hours and countless deaths to “get it,” but the beauty of Elden Ring is that you never truly do. Each new area or significant foe presents a new challenge, and overcoming these obstacles is a continuous, recurring process that takes you from “there’s no way I can do this” to “I can’t believe I just did that.”

It would be a lie to say that everything in Elden Ring is easy work with a satisfying payoff. Sometimes it’s just plain annoying. When dodgy autotargeting or an erratic camera steals victory from you in a game that is purposefully designed to be difficult, it can feel cheap. Elden Ring’s tenacity can also be exhausting. No enemy should be underestimated, and death is only one or two mistakes away. There’s a jarring lack of internal logic: one minute you can slay a literal demi-god, the next you’re killed by a few swings of a grunt soldier’s sword.

Nonetheless, the tangible sense of satisfaction and relief that Elden Ring consistently provides will be unlike any recent AAA game you’ve played – unless you’ve previously played FromSoftware titles. Elden Ring’s most terrifying feature, in my opinion, is not its difficulty. It’s because of its size.

This game is massive.

Let me tell you another story that came to mind frequently during my time with Elden Ring. Back in 2014, it was my first day at an office job. I asked the obviously nerdy IT guy if he’d ever played Skyrim in an attempt to connect with him. “Best 500 hours of my life,” he replied, looking me in the eyes.

At this point, it’s impossible to say, but Elden Ring appears to be a game on that scale. I’ve put in 60 hours and estimate that I’m about halfway through the story. A 100-hour campaign is impressive, but it only provides a partial picture. In a game like this, seeing the end credits roll isn’t quite the same as “completing” it. You’ll miss so much of the Lands Between if you stick to the main quest as strictly as the game allows.

Consider how Elden Ring’s scale progresses for more information. You begin in one of the Lands Between. You travel around the area, completing dungeons, side quests, and defeating ferocious beasts. Then there’s a mega dungeon at the end with a demi-god boss. You defeat the boss, and a new section of the Lands Between opens up, allowing you to repeat the process.

The areas that open up after each major boss fight are massive and densely populated with enemies to fight and sights to see. The Lands Between are both serene and grotesque at times, but they are always enticing to explore. Between nightmare dungeon battles, adventuring through The Lands Between is a fantasy. However, it is a time-consuming fantasy.

Remember that everything in this game has the potential to kill you. This complicates exploration: in most RPGs, being one-hit killed by a new enemy means returning to the area when you’re stronger. In Elden Ring, it can be difficult to tell whether an enemy is tough because you haven’t leveled up enough or because the game is tough. It’s usually the latter, but not always. On two occasions, I spent over an hour attempting to defeat dungeon bosses before deciding to “come back when you’re stronger.”

At those times, I imagine someone who only has time to play video games for an hour or two at a time. I imagine them spending their entire gaming budgeted time being mauled over and over by the same mini boss. In an hour, you can see a lot of The Lands Between, but you can also see almost nothing if you can’t get past a difficult obstacle. This is unquestionably a game that benefits from longer periods of uninterrupted play, which many people do not have.

So, if you’ve never played a Dark Souls game before, should you play Elden Ring? Yes. The difficulties are enormous, but so is the reward. The more appropriate question, in my opinion, is this: Do you have 100 hours available in the next month or two? If you don’t, you’re not going to make it.

Elden Ring necessitates a significant investment of both time and patience. But memories aren’t cheap. I clearly remember that night in 2006 when I defeated Sephiroth. I haven’t finished Elden Ring yet, but I’m sure I’ll think about it for a long time.

Where You Should Farm Runes

Elden Ring requires three things to progress: skill, luck, and runes. Runes are required not only to purchase items, but also to level up your character. The most efficient way to strengthen your Tarnished is to level up your weapons, which requires both runes and Smithing Stones. Then there’s good ol’ character leveling. This is simpler in that it only requires runes. There are tens of thousands of runes.

To begin, proceed to the Third Church of Marika, which is circled on the map above. If you haven’t already found the Site of Grace, go to Agheel Lake North, where Melina granted you Torrent. Continue on the path, ignoring everything, including a giant who will be waiting near the Church. After you’ve activated the Site of Grace inside, go around the back to find a transporter by a small cove.

After passing through the transportation portal, you’ll be transported to the Bestial Sanctum in the Dragonbarrow region. Gurranq, a creature inside the Sanctum, rewards you for bringing it Deathroots. But that’s a different guide: what we’re interested in here is outside.

Looking out into the fields, you’ll notice a massive dragon knight guarding the Sanctum. The Black Blade Kindred is a boss. Do not oppose it. You will perish.

Instead, walk to the left of the steps you’re on and jump into the field. You won’t be noticed unless you’re directly in front of the boss, so avoid that. However, if you go into the fields, you’ll see a swarm of diminutive, statue-like warriors walking around. These are the reasons you’ve come.
They’re easy to kill (by Elden Ring standards) at almost any level because they stagger when hit. And you can sneak up behind them and perform a critical hit from behind, which will either defeat them or take a chunk out of their health. Best of all, killing them grants you slightly more than 1,000 runes each.

All these enemies are walking around alone on the left side of the balcony, where you jump off. The right side is more difficult because they travel in groups of two or three. If you’re a beginner, I recommend hanging to the left and killing them one by one. In either case, you can quickly amass a large number of runes by killing a group, resurrecting them at the Site of Grace within the Bestium Sanctum, and repeating the process.

Here is some Elden Ring mods you can take look through: