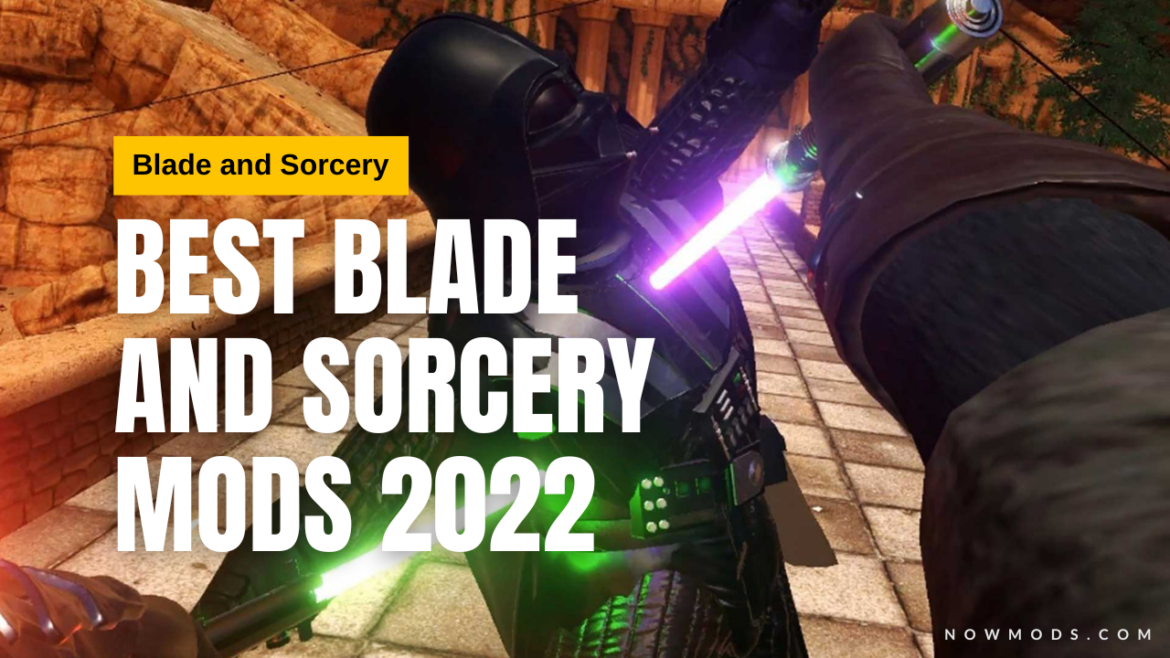 For your convenience, we have compiled a list of the Best Blade And Sorcery Mods 2022. For you to easily evaluate and make an informed decision. Check out the article below!

Please see the list below for some of the best Blade and Sorcery mods for Weapon.

This Lightsabers mod for Blade And Sorcery adds the most notorious of futuristic swords. And giving you the opportunity to go all Obi-Wan on some enemies by slicing them with a Lightsaber.
They also look awesome, with twenty-three different color options. So if you like Star Wars, this mod is well worth having a look.

If you want the ultimate in Star Wars, The Outer Rim mod has a large array of weapons. An airburst gun and a classic helmet are also included.
It also includes some custom maps and NPCs, as well as some pretty cool features like the ability to lengthen or shorten your lightsaber blade and some interchangeable kyber crystals.

Fisher’s Pistol Pack is a great option if you need a modern weapon to fight with. It will provide you with a variety of pistols to use, each with their own animations and sounds.
When dealing with oncoming enemies, it will provide you with significantly more firepower than your classical axe and flail. But it should absolutely make things interesting given that they will also be equipped with pistols.

Crossbows is a straightforward mod. The crossbow is simply added to the possible weapon mix for your Blade and Sorcery gameplay.
In the Middle Ages, bullet warfare was quite common. This adds realism while also having a faster rate of fire than traditional archery.

The Medieval Megapack includes over 300 weapons to choose from, including swords, axes, and more. So, when you want to disembowel or knock your enemies down. This Blade and Sorcery mods will provide you with numerous options for doing so.

Blade And Sorcery is more than just a game about slaying enemies with blades. It also employs magic to accomplish this. The Earthbending version broadens those magical abilities to allow you to use weapons. You can defeat enemies by shooting rocks at them and summoning spikes from the ground.

Today, you can use a wide range of swords from throughout Japanese history. Among them is the Doujigiri, widely regarded as the finest sword ever made in Japan. This is also one of the best Blade and Sorcery mods.

Have you ever wished for a pair of large magical hands to help you defeat your enemies? That is why the Mystic Hands – one of the best Blade And Sorcery Mods.

It really adds a pair of massive hands with magical abilities to the game. You can use it to annihilate baddies in a single fall.

Here are the best combat mechanics Blade And Sorcery Mods to use.

Expect a revamped damage system with hits that deal appropriate damage based on where you hit the enemy. To make things more realistic, particular weapons such as bows and arrows have been reworked. Overall, this is a very impressive mod.

SharpAI, in short, raises the overall difficulty of AI by adding over 1800 lines of C# code. And teach them proper counteroffensive and backing from every player’s swing.

They will not easily lose their weapons, and the usual ramming around will not help. This is a fantastic addition for anyone looking to make the game a little more difficult.

This is one of the most incredible map Blade And Sorcery Mods for players.

The setting for Sword and Magic is a medieval fantasy world. As a result, it is also possible to include a modern office in the game.

It’s exciting to depart from the traditional fantasy setting and bring a new perspective to the game.

Fort Toth is a town-based map with several battle zones to explore. Toth, developed by Dragonsnight, has indeed been downloaded over 26,000 times since its release in early 2020.

This Blade and Sorcery map has been designed to work with all VR devices. Around the map, there are four different wave areas. Objects are now traversable, adding another exciting feature to the map. Fort Toth is one of the game’s greatest effective and high maps.

Dragonsnight’s Drags Colosseum is yet another B&S map. It is a scale model of a large Roman Colosseum. The map includes a live audience in the stands that reacts to your every transition and attack.

There are numerous enemy spawn points scattered throughout the arena. You’ll feel great defeating enemies in a Colosseum-style combat zone.

Pirates Attack is a map that features two different pirate ships. You must protect your ship from pirate attacks. But don’t fall into the sea or you’ll lose the game!

Swinging ropes help you navigate your way between the two ships on this map. There are also slats, multiple levels, and scattered items scattered throughout the map.

Here are the Best Blade And Sorcery Mods we have chosen, and we guarantee you will be pleased. These mods will give players interesting and enjoyable experiences. Based on numerous credible sources, we chose the best mods for our article. I hope readers have a good time and enjoy the game.

For more information, look at some of our GAMING NEWS and MODDING GUIDES