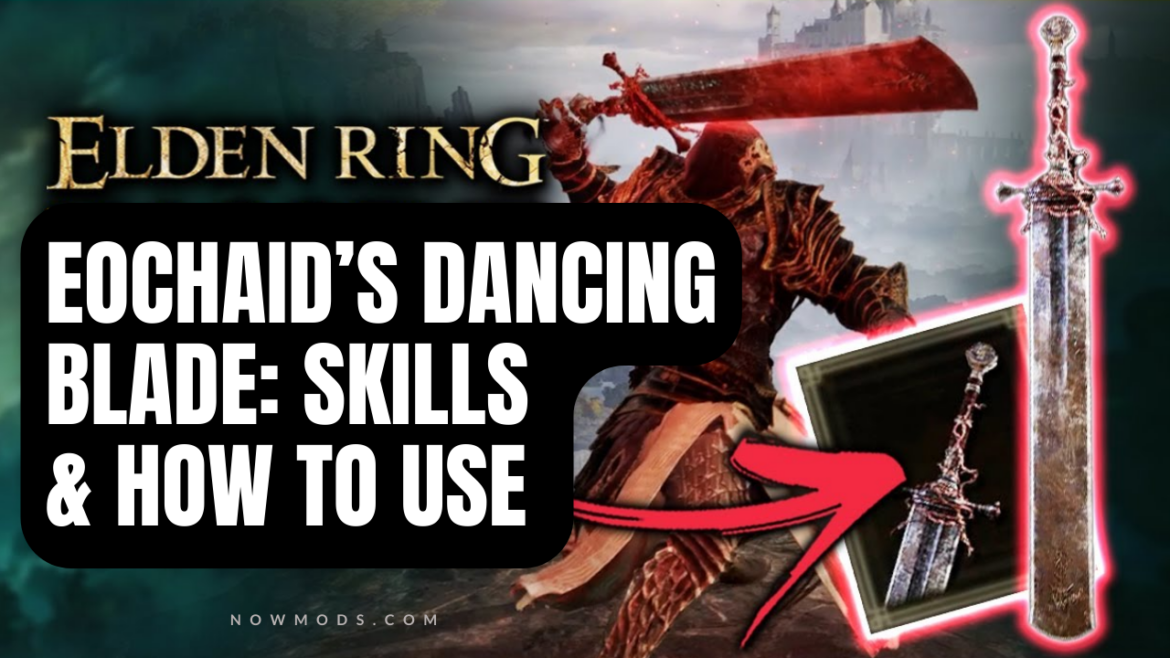 The following is a list of Eochaid’s Dancing Blade’s weapons.

Cherished sword of Eochaid, a smaller, long-gone kingdom. It is important to distinguish the copper color from rust. However, a conduit that can only be moved by the will of the person holding it. The sky is filled with dancing Eochaid swords.

Obtained from the cliffs close to the Marika Third Church. However, to get it, you must first escape Caelid’s Gaol Cave. The lootable corpse with the sword is at the end, through a tunnel.

The Regalia of Eochaid scales highly in both Dexterity and Arcane, with Strength coming in second. to increase this weapon’s bonus damage output. The most benefit will come from increasing the Dexterity attribute, while increasing the Arcane attribute will improve the weapon skill.

Using this weapon in conjunction with an off-hand weapon that has debuff-fighting capabilities. The level of damage you can deal can be increased by using different damage types.

This weapon has the Eochaid’s Dancing Blade weapon skill and is not infusible with Ashes of War. Arcane energy is infused into the weapon by this skill. and swings the sword forward, performing a corkscrew strike before finishing with a broad slash.

Legendary sword of the relatives of executioners that ruled the Shaded Castle, House Marais. Among the legendary weapons. The Bell Bearing Hunter, Elemer of the Briar, snatched the sword from the spot where he was about to be put to death. And equipped it with military prowess from his native Eochaid.

The Marais Executioner’s Sword has a small Dexterity requirement and primarily scales with Strength. Strength is the attribute where you’ll see the biggest bonus increase in physical attack damage.

This weapon deals extra Magical damage and has powerful attacks with a wide but short reach. The weapon skill locks enemies in a stun and deals high damage to them for the duration of the attack. It is therefore a powerful PvP weapon. If you line them up properly, it can also hit several enemies at once.

Weapon proficiency The weapon receives an arcane energy infusion from Eochaid’s Dancing Blade. and performs a corkscrew attack while hurling the sword forward. It spins and consistently deals damage, finishing with a broad slash.

How to use Eochaid’s Dancing Blade

Check out the Eochaid’s Dancing Blade user manual below

During combat, it can smoothly stagger a target to the ground with its rapid and continuous hits. When this occurs, don’t miss your chance to land a critical strike!

It is an excellent PvP weapon due to its speed and range. A single drill attack from you can hit your opponent multiple times, causing them to stumble quickly.

It works best when used against a lone enemy rather than a group of enemies. But when used in a horde, it could still defeat a few foes at once. It will, however, be more effective in a PvP conflict or in boss fights. Due to its drilling-like attack’s multiple hits and quick staggering ability.

Infuse the sword with energy, then fling it forwards in a corkscrew attack. The sword continuously deals damage while violently spinning. Charge the attack to increase reach and duration of the spin.

The tutorials for Elden Ring are listed below.

In order to create a gravity well, drive the weaponry into the ground. This attack not only harms enemies but also draws them in. Has more of an impact than Gravitas.

Then, use it as a spear by infusing it with the red lightning of the legendary dragons. Its power can be increased by charging it.

Elden Ring’s Angel’s Wings is a one-of-a-kind weapon skill. Continue reading to learn more about this skill, including the effect of Angel’s Wings, balance modifications, and how to use it!

Move and imbue the wing-blade weaponry with light before attacking the enemy with a slashing attack. The white wings obstruct recovery actions involving a flask of tears.

You can understand some skills better thanks to the instructions on Elden Ring Eochaid’s Dancing Blade above. And how to employ them most effectively. Let’s start your own captivating trod right away, come on. We have additional tutorials related to this available on our website.