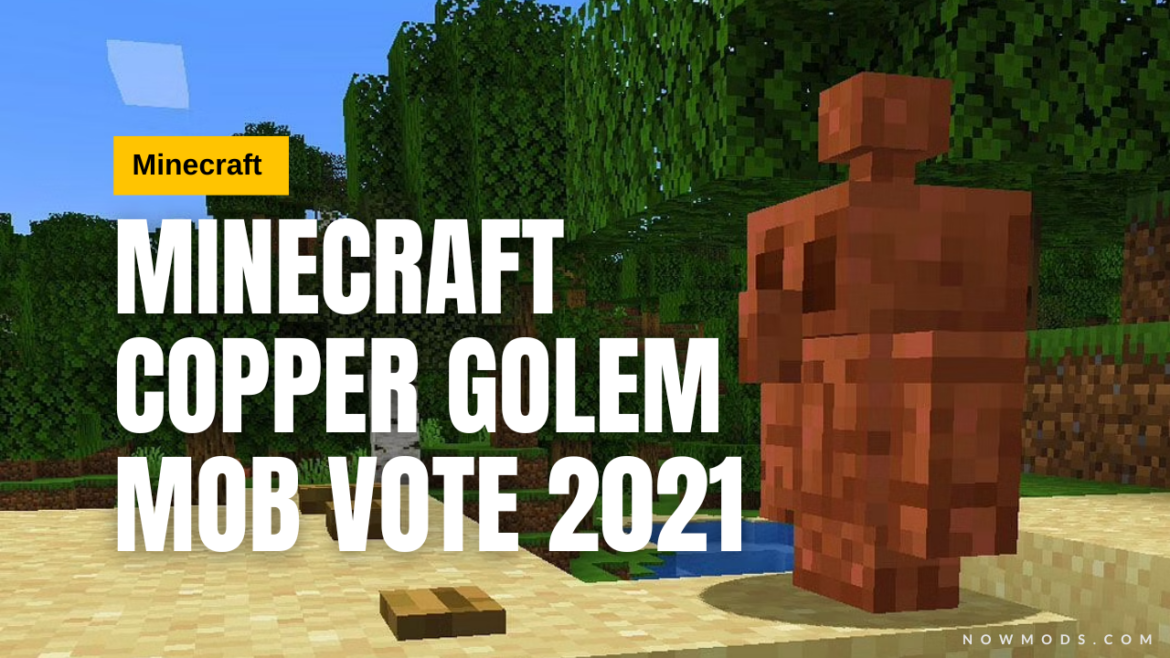 How To Make A Minecraft Copper Golem | Minecraft Mob Vote !

Last year, a mob vote was held on Minecraft Live. They have already carried out this. As a result of their victory in the Mob Vote, the Phantom and Glowsquid were both introduced to the game. With the Allay, the Glare, and the Minecraft Copper Golem, this year offered three excellent options.

In the end, the Allay triumphed rather easily. In two rounds of voting, beating out the other two by a rather substantial margin. The Allay won, and this year’s 1.19 update will include her in the game instead of the other two. Sadly, The Great Hunger and joining the Iceologer were never released.

The Copper Golem, who came in second, is included in the game thanks to an add-on made by a Minecraft Redditor.

What is Minecraft Copper Golem?

Likewise, what does the Minecraft copper golem do? The Minecraft Copper Golem appears to be a highly practical creature for any player who enjoys using Redstone to create various devices. It could be the first animal in Minecraft with the ability to instantly ignite Redstone. It will be capable of depressing copper buttons.

It doesn’t seem like the copper golem is as useful as the allay. However, because copper is so widely available and has so few uses, this mob is sure to receive a large number of votes. Additionally, golems are a fantastic aspect of Minecraft and are a lot of fun to design and build. It seems like a pretty excellent idea to add another.

While it won’t offer the same level of protection as an iron golem, it will grant players access to a brand-new item: copper buttons. If the copper golem isn’t included, this item might or might not appear in the game. However, gamers should strive to support the golem if they really desire that item.

Is it possible to make a Copper Golem in Minecraft?

Players may speak up during MINECRAFT MOB VOTE 2021: COPPER GOLEM and Mojang will take notice. They have more control over which mobs are included in the game and which ones are excluded, making them feel more integrated into it. Minecraft does this every year, but the losers never get to play the game.

Little information on the genesis of Minecraft Copper Golems has yet to be made public. However, a post on the official website has disclosed some unique characteristics.

The user may build the Copper Golem using Copper Blocks, according to information released. In the Caves and Cliffs update Part I, a new mineral resource called copper was introduced. Over time, this substance oxidizes.

The Minecraft Copper Golem has the following distinctive qualities:

Sadly, only one of the three creatures may prevail, and the Minecraft Copper Golem does not.

The Copper Golem was widely regarded as the greatest choice out of the three. It introduced a joyful crowd and gave copper a much-needed use. Even if the majority ultimately disapproved, the golem is still present. Everything is now possible because of mods and other golems addon. That includes being able to generate and interact with a Copper Golem that was created by this Redditor.

In this add-on, you may spawn a Minecraft Copper Golem by setting a carved pumpkin on top of a copper block with a lightning rod. When lightning strikes the lightning rod, the golem will materialize.

Much like it was stated on Minecraft Live, the recently spawned golem does its duties. It is capable of clicking copper buttons and follows copper block pathways.

The majority of users utilize modifications to enhance the game. Mods, however, do not work with the Bedrock Edition (There are behavior packs available that are quite similar). Thus, these players are frequently excluded.

The add-on in question, however, is a behavior pack and only works with the Bedrock Edition. The Bedrock version is not missing anything this time. A download for the add-on was provided by the original poster.

Having all three gangs declared. With three fantastic candidates for the winning mob, this is unquestionably the most exciting race ever. Fortunately, a Redditor for Minecraft made an add-on, so you can now do it on the Bedrock version. Download Minecraft copper golem Addon V2 with Mcpeaddons.com

How To Make Slow Falling Potion in Minecraft Bedrock Edition