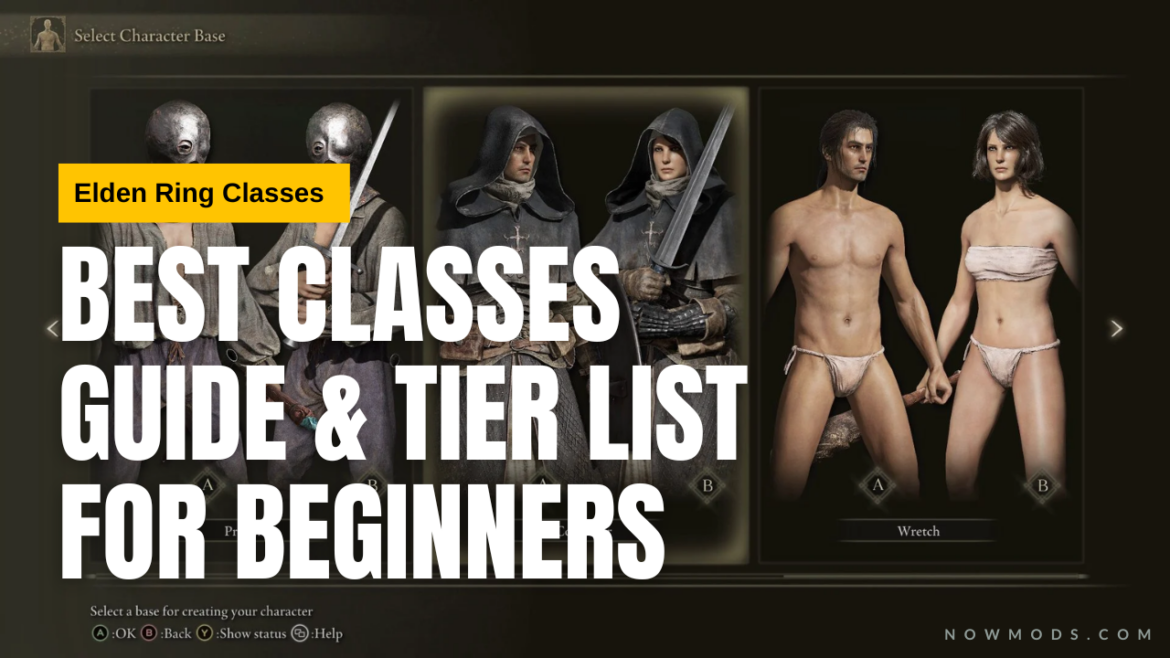 Before we get into the leaderboards, we should understand how the Elden Ring Classes work. Classes are appropriate for a variety of playstyles. We have compiled a ranking list of Elden Ring for you based on all of the factors. Detailed instructions in which we will examine each class in depth. Each class’s strengths and weaknesses Most importantly, which classes are appropriate for beginners.

The main reason you need an Elden Ring classes tier list is that each of the ten available to you plays differently. As a result, not all may be the best choice to mark your entry into the game.

These Elden Ring classes are the best of the ten available. In the beginning, all of them are powerful enough to deal significant damage to your opponents. Though these classes aren’t perfect, their flaws are far more minor than the others.

These Elden Ring classes are perfectly suited for new players who want to start with an unforgettable victory.

There are plenty of melee classes to choose from in the Elden Ring, but the utter tank simply takes the prize. This, we believe, is primarily due to Vagabond’s inherent tackiness.

There are plenty of melee classes to choose from in the Elden Ring, but the utter tank simply takes the prize. This, we believe, is primarily due to Vagabond’s inherent tackiness. It is without a doubt one of, if not the, best Elden Ring classes for beginners.

Vagabond packs a powerful punch thanks to its excellent armor. Players will appreciate the incredible synergy of Dexterity and Strength available. As well as the fact that it begins with a Longsword and heavy shield. That is, players can propel themselves in any way they want!

It possesses all of the Elden Ring classes characteristics required for an intense fight, allowing you to get right down to business. What more authority does a novice require? Furthermore, there is a high Vigor (15 whooping points!) paired with.

While not as exceptional as the S-Tier classes, these choices should not be overlooked. These classes are worth your time because of their unique stats that perfectly fit different niches.

Warrior is a strong contender in our Elden Ring classes tier list. And it could be right next to Vagabond if it didn’t have such a steep learning curve. Yes, the Elden Ring’s warrior class is difficult to master.

This is perhaps the most likely of the melee classes to disappoint newcomers. Warrior class starts with scimitars and only an offhand shield. Offering very limited damage per hit potential (something to keep in mind when starting Elden Ring).

The chained pair of scimitars, on the other hand, can be dual-wielded to deal constant damage. If you are willing to make that sacrifice, we are delighted to inform you that your efforts will not be in vain.

In fact, given what the Warrior class has to offer, some players may prefer to sacrifice a little functionality at first. Once fully mastered, the class has the potential to be extremely lethal.

It’s a fantastic Elden Ring classes for those who enjoy fast-paced melee combat. Furthermore, you gain 16 Dexterity points for dealing incredible damage to your enemies.

B-Tier classes should not be underrated. Though they were unable to reach the top ranks, these Elden Ring classes are best when used with specific playstyles. We will only recommend the classes listed below to experienced players. Beginners may try their luck, but only after they have been in the game for a while.

We understand that most true Dark Souls fans are blown away by the addition of another sorcery class in Elden Ring. Many traditions have been abandoned by the game. Nonetheless, this class lacks the proficiency of the other sorcery classes. Please don’t assume it’s frail.

The Prophet class is one of the best spellcasters in the horde due to its impressive starting Faith stats. However, because it does not support melee attacks, it is not a hybrid option. Furthermore, it is fragile and has insufficient starting items (just a finger seal and a spear).

Using the Prophet class can be difficult until a player masters the use of magic incantations and summons. Players in search of a Faith-based starting class and

These classes are severely lacking. They are not the classes we would prefer for our first Elden Ring fellas. However, if you are a pro gamer or simply enjoy experimenting with every possibility presented by Elden ring, you can still attempt them.

As an experienced Elden Ring player, we believe Wretch can be quite interesting in the end. But for newcomers, it is simply unacceptable. In terms of stats, the class remains one of Dark Souls’ most disadvantaged classes.

The Wretch layer is defined by a half-clothed character wielding a club and suffering from severely lowered balance stats. Inadequate equipment combined with low stats can lead to beginners failing miserably.

However, as you progress further into the game, the initial struggle begins to bear fruit. Because the Wretch is a Level 1 class, players can design it however they want. Resulting in some of the best builds producing a massively influential class.

We worked very hard to create this tier list. All of the best Elden Ring character classes are ranked after extensive research into their abilities, survivability to combat possibility, and damage skills.

Ultimately, the more efficient and maneuverable classes in the Elden Ring are ranked higher than those that are a bit more complicated to deal with.

Which class should beginners start with?

Apart from in most RPGs, the concept of ‘class’ in Elden Ring is not rigid and unchangeable. You’ll develop your own Elden Ring classes over time, and it won’t look exactly like any of the starters. Choose your class as a starting point and nothing else. You’ll soon forge your own path through experimentation.