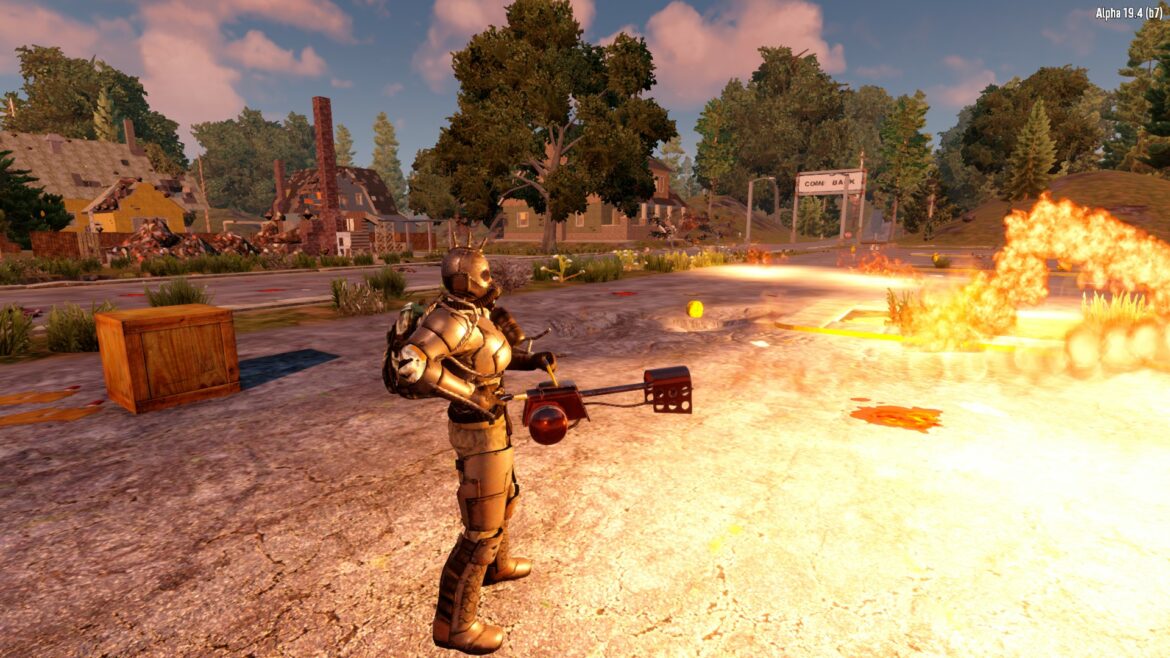 This Firearms Expansion 4 mod is compatible with 7 Days to Die A20.2 and adds 28 new weapons to the game arsenal that are compatible with the existing ammunition, mods, and perks.

File credits
Mayic for all the weapons graphic and sounds

ONLY T0 AND T1 WEAPON CAN BE CRAFTED, THE OTHER ONES CAN ONLY BE FOUND IN LOOT OR BOUGHT FROM TRADERS.

-M134 Minigun can be found only in military boxes (2% chance), this weapon has the highest DPS of the game but will drain your ammo supplies and will slow you down while holding it.

-Flamethrower a special anti-horde weapon, it’s governed by the perk advanced engineering, can use motor tool mods and gascan as ammo. this weapon can be crafted after reading the schematic or found in destroyed workbenches (2% chance).

-Railgun a special hi-tech weapon for the intellect class, it’s governed by the perk electrocutioner and uses iron dart as ammo. this weapon can be crafted after reaching electrocutioner level 5 or found in secret hidden stashes (2% chance).

-M82 Barrett a heavy 50 cal sniper rifle with a insanely high dismember chance that can use only special .50 bmg bullets and the variant Incendiary and Armor-Piercing. This weapon can be found only in military boxes (2% chance) and came with its own scope that can be replaced by 8x scope.

-M1A2 Thompson Old and legendary Automatic Submachine Gun that uses 9mm Ammo. Holding this weapon while wearing a full suit and a press hat will grant you a 40% bonus buying and selling goods. This weapon can be found only in gun safes (2% chance).

-AA12 this full automatic shotgun has massive damage output and a strong recoil. Found only in gun safe (2% chance).

-M79 GL40 a small grenade launcher less powerfull than a rocket launcher but also more handy and easy to use. This weapon is craftable after reading the schematic and can be found in loot or bought from traders, uses 40 mm grenade ammo.

How to install the mod?

I created this Firearms Expansion 4 mod for myself and decided to share it on this site because it doesn’t cost me anything and I’m happy to make this game better for others as well.
I don’t own all of the assets; I’m just the one who makes them work in the game.
I don’t have unity, I didn’t create the graphics for the weapons, nor did I create the sound or animation, I just pieced things together from old alphas 17-18 mods and already ingame existing things.