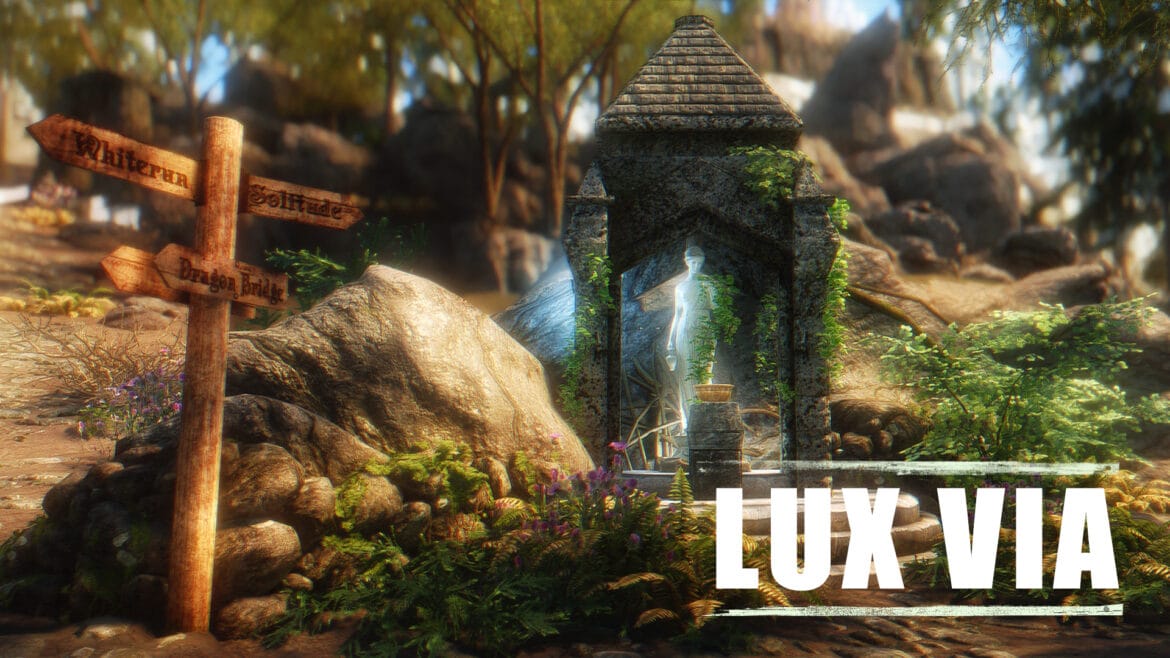 Lux Via is reworking main roads while focusing on lighting, adding consistent light sources between towns and villages, improving or reworking many bridges and crossroads from scratch, and adding a lot of points of interest to make roads a little more interesting.

This Lux Via mod does not have any known dependencies other than the base game.

Version 1.2
Installed Lux Via files now include Rudy’s glow map for all ENB light compatible lanterns.
Added Owlmon’s patch for Sojourn Over Signposts. (full credits and thanks to him)
Added a He-Man patch to get rid of Civil War and Battlefield Skeletors around Windhelm.
Removed more lanterns in the “less lantern” optional plugin, on the Rorikstead road and around the volcanic area.
Fixed all stonewall placements so that vanilla mesh works just fine (I would advice everyone to use Skyrim Landscape overhaul from Skyrim LE though, vanilla meshes are way too bad)
Fixed Whiterun Gazebo collision.
Fixed Whiterun bridge lantern and moved it away from all roadsigns.
Moved the roadsign post next to Solitude small altar so that it hides the stonewall seam since vanilla stonewalls basically prevent curved placements.
Now includes resource packs only in the misc section since Via lanterns will now be a hard requirement for Lux Orbis and my next projects. I won’t force people to use Via though so this resource packs will be available as separate downloads.
Version 1.1
Includes all fixed lanterns. Crucified skeleton with lantern is now ENB light compatible.
Materials have been fixed in some meshes.
Now inludes a small optional patch with some deactivated lanterns in less populated areas around Whiterun mostly.
BDS patch has been removed until the issue is being fixed.
Old Hroldan patch now has correct install path and infos, hence Great Village of Old Hroldan dependency rules.
A few things have been tweaked and improved in the main plugin.
Missing brazier mesh and textures have been added. Orbis users shouldn’ have noticed it but other people definitely did.
Keld Nar and CRF floor patches have been updated with missing changes.
Includes the fixed Oakwood plugin.
I’ve added a new mesh for Talos greatsword altar activator and changed the plugin path.
(Quick update) I’ve added Rudy’s ENB light glow map I’m using for all lanterns in the update section since I forgot to add it. People already using any Rudy’s ENB light mod should have it already though.
(Ninja update) Reuploaded the FOMOD without Old Hroldan patch cause it’s not needed anymore and was pretty much WIP material.

Lux Via is the crowning achievement of my Skyrim lighting project. Because vanilla roads are rather dull, I’ve attempted to breathe new life into all of the main ones. The main goal is to add consistent lighting between towns and villages; however, depending on the hold’s climate, lore, or town proximity, light sources may be different and less or more sustained.

Most bridges have been improved or completely reworked from the ground up, and many crossroads now have better lighting and have been reworked as well, depending on location and situation. Most changes have been made with consistency in mind; vanilla assets I use are dependent on vanilla locations (basically, I use Imperial fort assets when I’m near an Imperial fort, for example).

Compatibility is also important; Lux Via should be compatible with many mods out of the box; I didn’t edit inner cities and instead focused on town and village surroundings without getting too close. The most conflicting areas are near some bridges because navigation had to be redone; patches for popular mods that edit these locations are included in the FOMOD.

Install the FOMOD just like any other mod. Upon installation, all current patches and an optional no-ENB light version are available.
Lantern and post resources have been separated from the main Lux Via resources and will almost certainly be used as a master for upcoming mods or even Orbis when I have enough time to replace the majority of vanilla lanterns with better ones. As a result, Lux Via relies on two master plugins, one for all lantern assets and another for Lux Via.
I’m also adding a light plugin to make it easier for people to manage conflicts. The light plugin basically forwards the most important vanilla changes like navmesh or landscape edits.

It is strongly advised to use DyndOLOD.

Because the main Lux Via plugin edits vanilla assets, I would recommend loading it as low as possible, especially below mods that edit landscapes. In my opinion, it should be loaded last, after all other master plugins. Light plugin should also be loaded near the bottom of your load order; however, because both mods are editing Solitude vanilla lanterns, Orbis should win most conflicts.

Running the ENB Light or synthesis patcher on Lux Via plugins with the appropriate factor (by default, it’s using a 2.0 factor to cut fade values in half, anything less than 1.0 will increase my own lighting fade values – usually 0.7 works well for people who don’t use any ENB).

Assets with or without ENB light.
Master plugins for all lantern resources and main Lux Via plugin.
An additional light plugin (ESPFE) with forwarded navmesh and ladscape edits to help with load order and compatibility.
Patches for:

Some compatibility patches have already been completed and incorporated into Via FOMOD. Via is incompatible with mods that serve the same purpose. Bridge, roadsign, and crossroad renovations may cause significant conflict; however, some have been patched. However, all mods that change the texture or design of road signs are fully compatible; I’m only changing their placements.
However, all mods that add lighting along roads are incompatible; at best, they stack and thus create a lot of dupes; at worst, they break the landscape with too much lighting or even cause shadowcasting light conflicts. As a result, all lantern mods are incompatible with Via.

Lux Via is fully compatible with Orbis and Lux, as they were all designed to work together and be used concurrently.