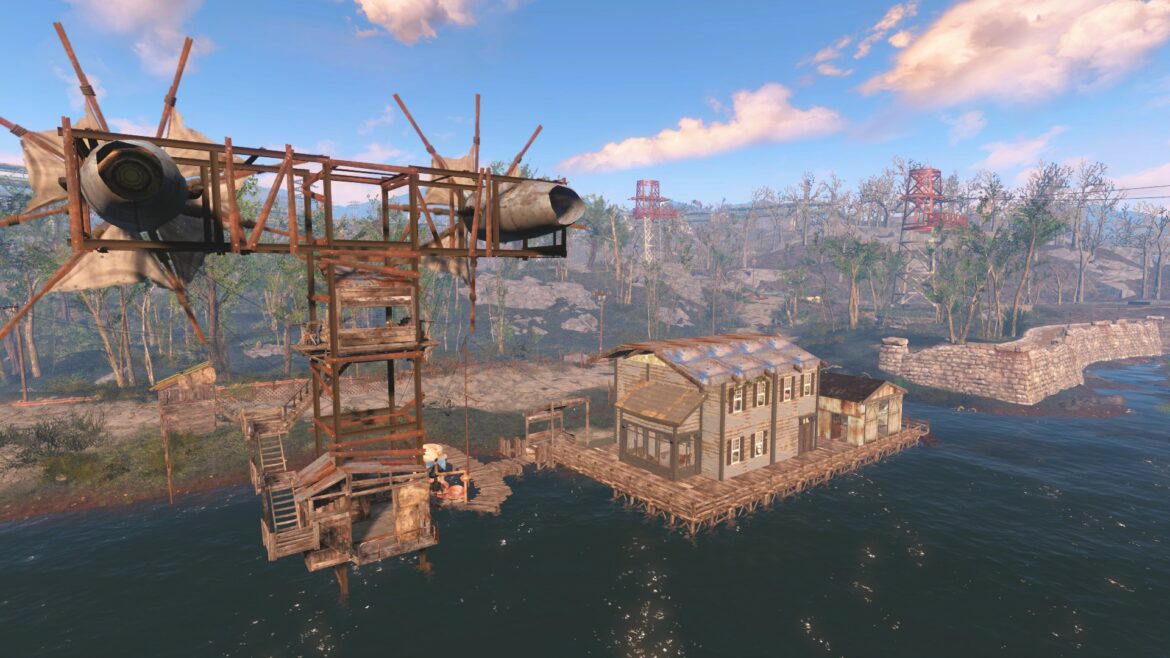 Place Everywhere helps place/build objects in settlements wherever you want, and change them whenever you want. There will be no RED!

This Place Everywhere F4SE plugin allows you to build and place objects in workshop mode wherever you want (see note below). Inside other objects, in water, and even in the atmosphere. Also makes almost all scrap-only (yellow) objects selectable/movable. You can also move objects out of the green zone and leave them there, which I do not recommend – if your settlement borders are too tight, simply use border expanding mods like Build High (be careful though, as that mod conflicts with scrap mods and can cause reset bug).

Allowing building in water has the unintended consequence of allowing all objects that require water to be placed in to be built/placed anywhere. Install water purifiers everywhere!

With Place Everywhere, you can now move workshop workbenches, power armors, and a variety of other previously immovable objects (by default this mode is off – press INS to enable). But be cautious: save before moving or deleting such objects!

Building restrictions (only in dirt, no green zone) remain in place. The only issue is that objects with such restrictions (and all if outside workshop) will still be highlighted as being able to build, despite the fact that they are not. You just have to remember: no building outside of the green zone, and if the object specifies that it must be built in dirt, so be it. You can create such objects in a valid location first, then move them wherever you want.

You can toggle the out-of-workshop-zone timeout on and off, allowing you to move built objects as far away from your settlement as you like. However, I’m not sure if placing settlement objects outside of settlement will result in no problems, so do so at your own risk.

Objects in Place Everywhere can be precisely rotated along the X, Y, and Z axes using the mouse buttons (by default) or the mouse wheel (see config option).

For scaling, precise rotation and movement work, make sure object you want to move/rotate is just highlighted (outlined), NOT selected (floating in front of player).
For ANY numpad actions to work – check if NumLock is ON.

ALL hotkeys and notification messages can be changed in config file (Data\F4SE\Plugins\place.ini)
If you don’t have place.ini yet, rename place_example.ini to place.ini
Information about what any option do can be found in place_ini_help.txt

If you don’t want any additional Place Everywhere features, except ‘no-red’ functionality – you can install one of predefined config files.

If you have beta-version of game and love to use this mod, but it is not available for beta yet – you have two options:

There is configuration file place.ini (if there is no such file – rename place_example.ini to place.ini) in Data\F4SE\Plugins, where you can configure ‘place everywhere’ mode by default and hotkeys:

F8 – toggles “Place Everywhere” mode (if you enabled toggle in config)
F1 – toggles object snapping (you have to cancel current object if you have any selected, for this to work)
F2 – toggle ground and surface snapping
F3 – toggle workshop grid snapping
F5 – toggle out-of-workshop timeout
F6 – toggle storing clamped objects in workshop storage, when underlying object is scrapped or stored in workshop storage
F7 – lock/unlock hightlighted object selection. While selection locked, no other object will be hightlighted, when your move your aim on it.
INS – toggle extra objects selection.
F11 – change timescale to 0.01 (can be changed in config) while in buld mode
ALT – set object movement relative to player (by default) or global world axis

If you are still looking for more Fallout 4 mods, take a look with these ones right here: