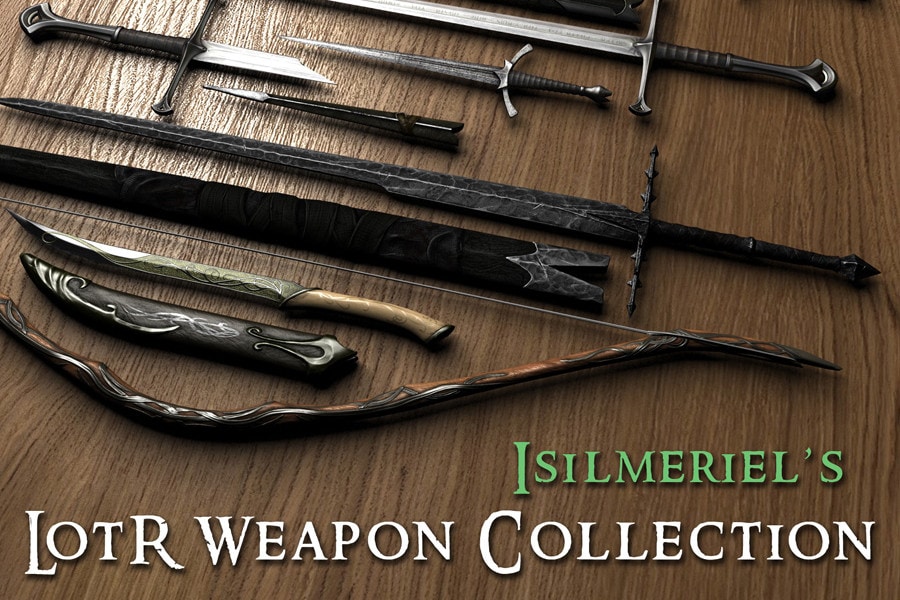 Sting, Legolas’ bow and daggers, Witch King Sword, Sauron’s Mace, Narsil, Anduril, Glamdring, and Morgul Blade from Lord of the Rings are among the high-resolution weapons from LOTR Weapons Collection.

Notes from the author
This author hasn’t included any additional information about file permissions.

Give credit where credit is due
In this file, the author has not given credit to anyone else.

Make your own fantastic screenies and upload them!

My Narsil & Anduril mod has been updated and is now combined with my other weapon mods and any future weapon mods. One thing I’d really like is if folks would quit whining about the weapon dimensions (too long, too narrow). If anything, blame WETA because they were modelled off WETA prop photographs.

The ability to build these weapons at any forge was eliminated in version 3.5. Instead, the weapons can only be created in the Moonforge, which is halfway along the journey to High Hrothgar, to reduce the amount of spam in the crafting menu. I will never add them back to the standard forges for the reasons listed. Moonforge is not the same as the lunar forge.

– BGS from the MERP team, for rigging and exporting the bow
– DigitalLion, for helping me resolve the two-handed sword crash
– DFG, Dalm, and others for showcase videos and reviews.
– Mergweq, EwokJedi, and Dahaka002011, for creating the Armed to the Teeth mod used in screenshots
– WETA, for the wonderful original weapon designs